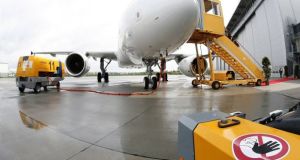 SMBC CEO Peter Barrett described 2016 as a “landmark” year for the firm, with the company’s revenues surpassing $1 billion for the first time and its aircraft assets exceeding $10 billion

Key directors and executives of SMBC Aviation Capital, the Dublin-based aircraft leasing business, received long-term benefits worth $18.9 million (€18.1 million) in the year to the end of March 2016, according to the company’s inaugural annual report.

This brought total compensation for this group of employees to $28.9 million (€27.7 million), more than double the $12.4 million (€11.8 million) they received in the previous financial year.

It is not clear how many directors and executives qualified for the long-term payouts. The report states that it included executive and and non-executive directors, members of the executive committee, and the company secretary.

A separate note to the accounts shows that a long-term incentive plan was established by SMBC during the year, payable to “selected employees”. This was based on the achievement of certain key performance targets, mainly financial and some operational, at the end of a pre-determined period.

Led by Irish man Peter Barrett, SMBC was acquired from Royal Bank of Scotland in 2012 by Japan’s The Sumitomo Mitsui Financial Group and Sumitomo Corporation.

In his CEO statement, Mr Barrett described 2016 as a “landmark” year for SMBC, with the company’s revenues surpassing $1 billion for the first time and its aircraft assets exceeding $10 billion.

Its fleet comprised more than 660 owned, managed and committed aircraft. These are placed with over 100 airline customers across the world. SMBC also had an order book of 110 Airbus A320neo and 90 Boeing 737 Max aircraft.

The year also saw SMBC enter into a $600 million (€575.5 million) revolving credit facility with five major banks, while it made its capital markets debut post the year end, with the issue of $500 million (€479.6 million) in senior unsecured notes.

Ireland is one of the major hubs for aircraft leasing, with many of the top players in the market basing operations in either Dublin or Shannon.