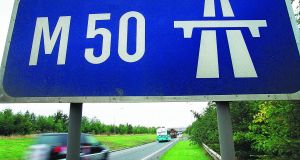 Traffic volumes on the M50 are growing by an average of 6% a year, and in some sections at close to 10%.

Minister for Transport Shane Ross has rejected a recommendation from the National Transport Authority (NTA) that extra tolls be placed on the M50 to curb rising congestion on the route.

In a report published this year on the transport infrastructure needs in the capital until 2035, the NTA said limiting the number of vehicles using the key orbital route was necessary “to ensure its strategic traffic function was maintained”.

Chief among these “demand-management measures” was a series of additional tolling points on the M50.

The NTA said even at current traffic levels there were now regular delays on the M50.

“If these delays go unchecked it will negatively impact on economic competitiveness in the greater Dublin area and the wider national economy.”

However, Mr Ross said there were no plans to introduce more tolls on the M50.

“That is not a runner. I know the NTA has a view on that. The congestion on the M50 is of huge concern, but it has to be part of a much wider investment in roads on a long-term basis and get people out of their cars.

“We are not going to react in a short-term way.”

Mr Ross said in the short-term the Luas cross-city, when completed, would help ease congestion on the M50.

The Minister also said changes to M50 junction merges, a swifter response to clearing the 120 crashes and incidents on the route each month and the signposting of alternative routes had been introduced to ease congestion.

Mr Ross said there was an anomaly around the location of the tolling point on the M50 which resulted in many drivers who use the route not having to pay but “this is not a good enough reason for trying to toll a lot of other people as well”.

Congestion on the M50 eased during the economic crash but traffic levels on the route have increased sharply in recent years.

There is no scope to add additional capacity to the route, and the NTA and Transport Infrastructure Ireland (which manages the M50) believe measures to limit the usage – particularly during the morning and evening rush – are essential.

“Without such interventions car-use in the outer metropolitan area [of Dublin] will remain high, and congestion may continue to increase, putting at risk the substantial investments already made in the M50.”

About 140,000 vehicles pass the eFlow tolling point each weekday.

The route also saw an average of 400,000 unique journeys per day where a driver travelled between two interchanges or less, suggesting that the M50 is being used for very short journeys.

The NTA study also found that the morning traffic peak is starting earlier and the evening peak is lasting longer, while journey times on the route have also increased.

Successive ministers for transport have rejected additional tolls as a means to control usage on the M50, fearing a political backlash from drivers.