Tesla posts 9.4% decline in quarterly deliveries of its electric cars 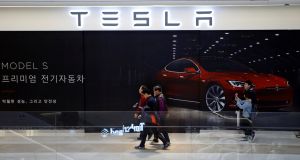 People walk past a planned store of Tesla in Hanam, South Korea

Tesla Motors has said fourth-quarter deliveries fell 9.4 per cent due to short-term production hurdles from the transition to a new autopilot hardware.

Tesla said production challenges, which started at the end of October and lasted through early December, shifted vehicle production towards the end of the quarter, resulting in delayed deliveries.

“We tried to recover these deliveries and expedite others by the end of the quarter, time ran out before we could deliver all customer cars,” the electric carmaker said.

Nearly 2,750 vehicles missed being counted as deliveries in the quarter due to last-minute delays in transport or because of the inability of customer to physically take delivery.

In addition to the fourth-quarter deliveries, about 6,450 cars were in transit and these would be counted in the first quarter, the company said.