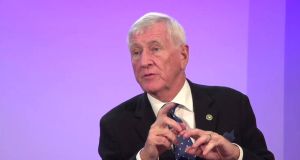 Michael “Kell” Ryan: retired from Ryanair in 2004, then worked in consultancy and public speaking

Mr Ryan (76) died suddenly in recent days in Cambridge, in southeast England, where he had been living for several years.

Younger brother of the Ryanair and Guinness Peat Aviation founder Tony, Mr Ryan built his career in the aviation sector. He initially worked for Aer Lingus, whose Heathrow operation he helped oversee, before his brother invited him to join Ryanair in 1986, a year after its launch.

He worked in senior management roles in a number of areas, including sales and marketing, at Ryanair, until he retired from the airline in 2004.

Since then he had worked in consultancy and public speaking. He was on the board of visitors of Embry-Riddle Aeronautical University in Daytona Beach, Florida, US.