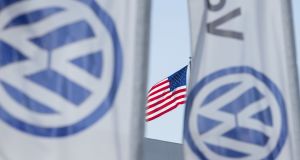 Volkswagen said it continued to co-operate with investigations by the US department of justice “into the conduct of individuals”. Photograph: Mike Blake/Reuters

A federal judge in Detroit sentenced former engineer James Liang to 40 months in prison on Friday for his role in Volkswagen Group’s multiyear scheme to sell diesel cars that generated more pollution than US clean-air rules allowed.

US district court judge Sean Cox also ordered Liang (63) to pay a $200,000 (€167,700) fine, 10 times the amount sought by federal prosecutors. Cox said he hoped the prison sentence and fine would deter other auto industry engineers and executives from similar schemes to deceive regulators and consumers.

Liang was part of a long-term conspiracy that perpetrated a “stunning fraud on the American consumer,” Cox said, as the defendant’s family looked on in the courtroom. “This is a very serious and troubling crime against our economic system.”

Liang pleaded guilty earlier this year to misleading regulators, and had co-operated with US law-enforcement officials investigating VW.

Prosecutors last week recommended that Liang receive a three-year prison sentence, reflecting credit for his months of co-operation with the US investigation of VW’s diesel emissions fraud. Liang could have received a five-year prison term under federal sentencing guidelines. Liang’s lawyers had asked for a sentence of home detention and community service.

Volkswagen pleaded guilty in March to three felony charges under an agreement with prosecutors to resolve the US criminal probe of the company itself. It agreed to spend as much as $25 billion in the US to resolve claims from owners and regulators and offered to buy back about 500,000 vehicles.

Volkswagen has admitted that it used software to deceive regulators in the US and Europe from 2006 to 2015. The ruse allowed the automaker to sell diesel-equipped cars and sport utilities without installing emissions control systems that could have compromised performance or posed an inconvenience to customers, prosecutors charged.

Prosecutors said the deception lasted a decade and first impacted vehicles in the 2009 model year in the US.

The German automaker declined to comment on Liang’s sentence on Friday. “Volkswagen continues to co-operate with investigations by the department of justice into the conduct of individuals. It would not be appropriate to discuss personnel matters,” the company said in a statement.

Liang’s lawyer, Daniel Nixon, on Friday urged Cox to consider a sentence of house arrest, saying Liang was not a “mastermind” of the emissions fraud. Liang “blindly executed a misguided loyalty to his employer,” Nixon said.

Federal prosecutor Mark Chutkow countered that Liang was a “pivotal figure” in designing the systems used to make VW diesels appear to comply with US pollution standards, when instead they could emit up to 40 times the allowed levels of smog-forming compounds in normal driving.

A prison term “would send a powerful deterrent message to the rest of the industry,” Chutkow said.

Liang is still employed by VW but no longer works as an engineer.

US prosecutors have charged eight current and former VW executives in connection with the diesel emissions cheating probe. Liang is one of the lowest-ranking executives charged so far.

Another VW executive, Oliver Schmidt, has pleaded guilty and is scheduled to be sentenced in Detroit on December 6th. Under a plea agreement, Schmidt could face up to seven years in prison and a fine of between $40,000 and $400,000 after admitting to conspiring to mislead US regulators and violating clean-air laws. – (Reuters)