Brexit, election and crackdown on diesel and petrol have ‘taken the froth off’ car sales 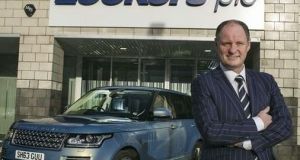 Lookers, which owns the Audi dealership for south Dublin along with Charles Hurst, the North’s largest car dealership, has warned that “Brexit and weaker exchange rates have created a degree of uncertainty in the UK economy, which is unhelpful, and we therefore view the second half of the year with some caution”, in its first interim results on Wednesday.

The company’s chief executive, Andy Bruce, said he now expects the British new car market to shrink by 3 per cent this year.

New car registrations in the UK have fallen since April, the longest run of declines since 2011 in Europe’s second-biggest car market, and are down 2 per cent year-to-date, according to industry data.

Uncertainty over the Brexit vote, a June snap election that gave no party a majority, and government plans to crack down on petrol and diesel models have all hit a market which hit record highs in 2015 and 2016.

Lookers, which posted an 18 per cent rise in first-half adjusted pre-tax profits from continuing operations to £50.2 million (€55 million) on Wednesday, had previously said it expected 2017 demand to match last year’s 2.69 million sales.

“We didn’t see all the political rumblings and the indecisive election coming and there’s no doubt that that’s had its effect on the fringes of the market in terms of confidence,” said Mr Bruce.

“We think in the full year the market will be down about 3 per cent . . . It’s definitely taken the froth off the market,” he said.

Lookers, which will increase its interim dividend by 10 per cent, said it had benefited from dropping a number of lower-performing car brands and focusing on a smaller portfolio of vehicles. It expects to meet full-year expectations.

Mr Bruce, who has been one of the most buoyant chief executives in previous months about the resilience of the market, also warned that demand in 2018 would depend on how the government handles Brexit.

“I sense that it might be about flat but a lot will depend on how Brexit plays out and the macro picture and the media commentary around it,” he said.