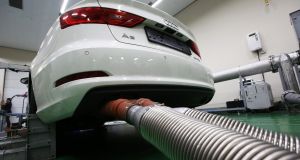 Senior managers claim that they only learned of the massive fraud at the VW group shortly before the scandal broke in September 2015. Photographer: SeongJoon Cho/Bloomberg

Audi chief executive Rupert Stadler, his board and leading VW managers were informed about diesel emission manipulation in their cars up to nine years before the Dieselgate scandal broke, it has emerged.

That is the central claim of a former Audi technician, on remand in Munich, in a 28-page statement to Bavarian prosecutors.

The claims, backed up with mails, presentations and minutes of meetings, contradict claims by senior managers that they only learned of the massive fraud at the VW group shortly before the scandal broke in September 2015.

If confirmed, the revelations would confirm what VW critics have claimed from the start: the decision to use software to manipulate diesel emission filters to work only in test situations, not on the road, went right to the top.

VW chief executive Martin Winterkorn resigned after the revelations and now a similar fate could await Audi chief executive Rupert Stadler. He sat alongside Mr Winterkorn on the Audi board in March 2006, the first time problems were raised over cleaning diesel emissions of noxious nitrogen dioxide.

VW hoped its “clean diesel” promise would help it crack the US market, but its “AdBlue” technology worked only with a sticky urea mixture. To not annoy their customers executives demanded the fluid last longer and ordered engineers to extend the gaps between refills. The solution: to use less.

When the engineer, identified only as Giovanni P, reportedly told senior Audi managers on October 16th, 2007 that the VW Touraeg refill lamp lit at 10,000 miles, they considered this a disaster for their “clean diesel” strategy. Instead it was decided the lamp should light only after 11,500 miles.

Other senior executives at VW, previously at Audi, also received incriminating emails in April 2008 according to the Süddeutsche Zeitung daily. It declined to name the managers, though Mr Winterkorn is believed to be one of them. According to Giovanni P, the entire Audi board was part of the emissions manipulation, at meetings in 2010 and 2012, about problems with AdBlue technology.