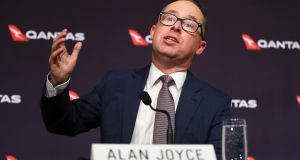 Alan Joyce, chief executive of Qantas Airways: The buybacks underscore the success of Mr Joyce’s efforts to turn around the company through a series of cost-saving measures

Qantas announced its fourth stock buyback in two years on Friday as the airline reported better-than-expected annual earnings, marking the end of a three-year turnaround under chief executive Alan Joyce.

The Australian carrier, reporting its second-highest profit on record, said it will repurchase as much as A$373 million ($295 million) of stock even as the shares traded near an all-time high. Qantas has now returned A$2.1 billion to shareholders since late 2015.

The airline also announced plans to fly directly from Sydney to London and New York within five years – if Boeing or Airbus can make a plane that can fly the distance. A direct flight from Sydney on Australia’s eastern seaboard to London would take about 20 hours, cutting around four hours off the current journey.

The buybacks underscore the success of Mr Joyce’s efforts to turn around the company through a series of cost-saving measures in the face of intense competition from rivals such as Emirates, which is now a partner. While earnings at its international business dropped, the local market helped profit beat analyst estimates.

“All of their segments are doing well,” said William O’Loughlin, an investment analyst at Rivkin Securities Pty in Sydney. “International is the higher risk area, but the margin is still reasonably healthy so there’s a bit of breathing room.”

Underlying pretax profit in the year ended June fell 8.6 per cent to A$1.4 billion as international rivals added flights and drove fares down, Qantas said. Analysts had expected earnings of A$1.39 billion. Qantas, which reinstated its dividend last year for the first time since 2009, kept this year’s final dividend at 7 cents per share.

Shares in Qantas jumped the most in almost two months in Sydney on Friday. The stock climbed 3.8 per cent to A$6.02, extending gains this year to 81 per cent and making it the best performer on the Bloomberg World Airlines Index.

As offshore rivals laid on more flights, Qantas’ international earnings fell 36 per cent. The operating profit margin at the international unit fell 3.2 percentage points to 5.7 percent, but Qantas said the pace of capacity growth by competitors has slowed.

“That moderated in the second half and we’re seeing that trend continuing,” Joyce said in an interview with Bloomberg Television’s Betty Liu and Yvonne Man on Friday.

In 2014, when Mr Joyce unveiled his turnaround plan, Qantas’s losses were ballooning amid a capacity war with local rival Virgin Australia and the airline’s share price wallowed near an all-time low. The Australian government even refused to guarantee Qantas’s debt.

Now, Qantas is taking a larger share of domestic profits from money-losing Virgin. And together with low-cost unit Jetstar, Qantas said it’s taking about 90 per cent of the Australian profit pool. Full-year earnings at Qantas’s domestic business rose 12 per cent to a record.

Mr Joyce said Friday he’s written to the chief executives of both Boeing and Airbus to challenge them to make an aircraft capable of flying ultra-long routes like Melbourne to New York with a full load. He said the Boeing 777X and an ultra long-haul Airbus A350 in development “can almost do the job.”

Airbus said in a statement that its A350-900 ULR will be in service next year for flights of up to 20 hours. By Qantas’s reckoning, that puts the plane 20 minutes short of a direct flight from Sydney to London.

“We’ll look forward to working with Qantas to see how we can meet its requirements for Sydney-London non-stop,” Airbus said in its statement.

Qantas is already planning to fly from Perth to London in March. That service - using Boeing’s Dreamliner – will be the first direct flights between Australia and Europe, and gives Qantas the opportunity to lock in domestic passengers from Australia’s eastern seaboard all the way to the UK.