Insignia is grand, but is it enough for senior ranks? 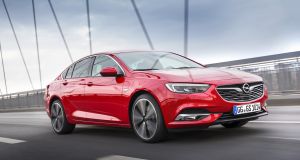 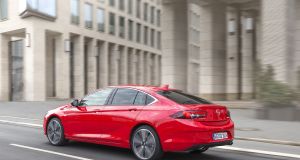 On the mechanical front, at least, the Insignia does hold its own

I’m still puzzled as to why Opel has felt the need to append the “Grand Sport” name to its new Insignia. It’s not as if the outgoing car was especially unpopular that it needed a new badge – the original Insignia, introduced in 2009, topped out its sales chart at a hair under the million mark, which is impressive given that the big, four-door saloon market was sharply contracting all through that time.

Opel hasn’t even bothered to put “Grand Sport” on the car itself. The badge on the back just reads plain old Insignia, so again I’m left puzzled as to the point. I’m just going to refer to it as Insignia, if that’s okay, and you can mentally, silently add the Grand Sport bit yourself, if you like.

Whatever you do or don’t call it, there’s no question that the new Insignia is a fantastic-looking car. Opel has binned the old four-door model and so this new one will be sold as only a five-door fastback (which looks sufficiently like a three-box saloon to keep traditional customers happy) and as an estate (which, although it cribs slightly from Kia’s Optima Sportwagon for its styling, also looks good). For a big saloon, the new Insignia looks low, lean, and just a touch muscular. The new Opel “face” with its inset grille and narrow, piercing headlights (now optionally equipped with high-tech LED bulbs) looks better here than it has so far on any other Opel model, and the styling even manages to shine through the beige-y-grey paintwork of our test car.

The cabin is a touch less successful, I have to say. There’s a mixture of styling cues from the old Insignia and the new Astra, which actually works quite well in aesthetic terms, and there’s no doubting the sheer comfort of the front seats, which really are excellent (our test car, in SRI trim, came with the optional sports seats which are a must-have, I would say). The part-digital, part-analogue instrument pack is carried over from the old Insignia and while it works well, it lacks some of the whizz-bang factor that you get with, say, Peugeot’s new all-digital i-Cockpit, or Volkswagen’s optional Active Info Display. There are also some quality foibles. The gear shifter in particular feels cheap and nasty, while some of the buttons and switches (especially those on the steering wheel) feel only just about adequate at the Insignia’s base €27,350 price tag, and not at all so at the €41,590 being asked for this SRI, inclusive of options. While the cabin looks good, and is spacious (far more so in the back than the previous Insignia – there’s lounging room now), there’s a slight lack of the kind of hefty quality that you get in a Mazda 6, Skoda Superb, or VW Passat, and that does hold the Insignia back a little.

The central eight-inch infotainment display screen is rather more successful, with slick and easy-to-use menus and the all-important Apple and Android phone connectivity. I did find that it would, annoyingly, occasionally drop the connection to my Apple phone, though, so clearly the warnings from industry-watcher JD Power that customers are more likely to be infuriated by infotainment issues than mechanical ones is holding true.

On the mechanical front, at least, the Insignia does hold its own. While there are much more powerful 2.0-litre diesel options, the 1.6-litre Turbo D Ecotec engine fitted to our test car proved more and adequate to the task. That’s partially thanks to the fact that Opel has managed to strip 175kg out of the Insignia’s kerb weight, compared to the previous model, and partially thanks to the fact that for a 1.6-litre, this engine is more well-endowed with power (136hp) and torque (320Nm) than is the class norm. It’s a little grumbly at low rpm, but once it’s warmed up, relative mechanical silence reigns, and the Insignia never feels less than sufficiently powerful for the task, even four-up with luggage. It’s also impressively economical, averaging better than 50mpg around town, and easily cracking 60mpg if driven with a touch of gentility on the open road.

As far as the driving experience goes, it’s just a touch underwhelming. Our test car came with the optional “Flex Ride” dampers which have two settings – Tour and Sport. In Tour, the Insignia rides with commendable softness, and in Sport, there’s actually relatively little penalty in terms of comfort. The steering, very, very slack in Tour, does sharpen up considerably in Sport but in either mode there’s a lack of sharpness to the chassis. Corners always seem to go on longer, and require more input than they should, and the new Insignia seems to have taken a backwards step in terms of agility compared to the old one. While it fulfils its long-haul comfort brief to the full (and I guess that’s really the point of cars such as this), the whole chassis feels unfinished and a touch slack compared to premium rivals such as the BMW 3 Series and Audi A4, and even to the likes of the Mazda 6 and VW Passat, which are more direct competitors.

Which is a shame. The old Insignia, I felt, was a car which improved steadily with age and which was never anything less than enjoyable and engaging to drive. This new one gets off to a great start with its styling and its engine, but falls surprisingly flat in other departments. It’s good enough to do its job, but fails to excel in any area.

From eating healthily to staying warm, how to treat Covid-19 in the home
3

Michael Harding: I sat alone in my room, even though I wasn’t in isolation
8

‘I couldn’t get a job in Ireland. Was it because I’m a different race?’
10