Germany plans ban on diesel cars in cities from early 2018

Software updates alone will not be enough to avoid ban, warns environment minister 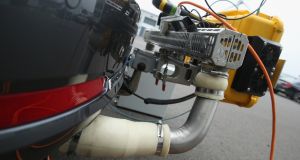 A Portable Emissions Measurement System device attached to the exhaust pipe of a car. VW, Daimler and BMW have agreed software updates to improve emissions but refused to consider costlier retrofits for their cars. Photograph: Sean Gallup/Getty Images

Germany’s environment minister has warned that software updates alone will not be enough to avoid inner-city diesel bans as early as next year.

Three weeks ago, at a high-profile “diesel summit” in Berlin, VW, Daimler and BMW agreed software updates to improve emissions but refused to consider costlier retrofits for their cars.

But a new report commissioned by federal environment minister Barbara Hendricks has warned that software fixes would result in a one-digit percentage reduction of pollution from noxious nitrogen oxide. With cities breaching annual emissions limits, some by three times, Ms Hendricks said greater efforts were needed by car companies and by consumers.

“The environment will benefit most if a premium motivates individuals to above all purchase smaller, more efficient cars,” she said, recommending the purchase of more fuel-efficient and natural gas cars, hybrids and electric models.

“Hardware solutions are much more cumbersome, but also far more effective than the announced software updates,” said Jürgen Karpinski of the ZDK.

Dirk Weddigen von Knapp, head of German Volkswagen dealers, said: “The trust of customers can only be regained with technical retrofits.”

With ongoing uncertainty over the future of diesel cars on German roads, the ZDK car association said older diesel cars with the Euro-5 emissions standards, new back in September 2015, were now piling up, unsold, in dealerships.

A survey of diesel drivers showed that 29 per cent are planning to sell their cars as soon as possible, while 77 per cent of dealers have cut prices on older models.

“The vehicles are hard to sell at the moment because customers are uncertain,” said the ZDK in a statement. “We need clear signals from government if and under what conditions these vehicles might be affected by driving bans.”

Instead of clarity, the diesel row has sparked fresh political feuding among Berlin’s ruling grand coalition, ahead of the September federal election. While the Social Democrat (SPD) controlled environment ministry sees software updates as insufficient to avoid bans, allies of chancellor Angela Merkel, in control of the transport ministry, attacked the warnings from the environment ministry as overly “ideological”.

Around six million diesel cars with the older Euro 5 emissions standard are registered in Germany currently, according to the federal transport authority.