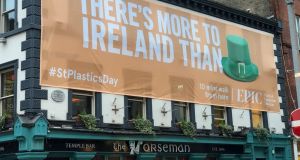 Temple Bar poster for Epic, the Irish Emigration Museum, where tourist tat can be recycled into tickets.

What, if anything, does it mean to be Irish? The St Patrick’s Festival, which begins on Thursday, hasn’t necessarily provided any greater insight no matter how many days are added to the official celebrations.

Indeed, with so many people prepared to make queasy links between Irishness and the results of dodgy DNA tests, it can sometimes feel like even asking the question is opening one big green Pandora’s box.

Kudos then to Epic, the Irish Emigration Museum based in Dublin’s Custom House Quay, for finding a way to market itself that doesn’t either perpetuate or ignore the annual explosion of novelty green paraphernalia on the streets, but consciously takes it as a starting point for why people should be proud of Ireland.

The campaign – “There’s More to Ireland Than…” – devised for Epic by the creative agency Public House invites visitors to the museum to trade in their giant hats, leprechaun beards, Tricolour boas, shamrock glasses and sparkly headgear between “#StPlasticsDay” (March 17th) and March 20th in exchange for free entry. Hilariously, this offer is termed an “amnesty”.

“This is about showing people that as well as the craic, the pints and the shamroguery, there’s more to Ireland and the Irish,” says Epic’s appropriately named managing and museum director Mervyn Greene. “Ireland has given far more to the world than stereotypes.”

As a piece of marketing, it taps into the aversion of people who would gladly stamp on a leprechaun hat if they saw one. But it’s also something of a gauntlet to members of the Irish diaspora sometimes known pejoratively (and unbeknown to them) as “plastic Paddies”, challenging them to learn more about the contribution to the world of the island with which they identify.

That can only be a good thing. And, hey, no one’s saying they can’t force their way into Temple Bar for a pint when they’re done.