Who can fix Nissan? 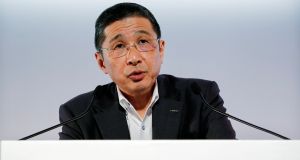 For almost a year, Hiroto Saikawa defied gravity. Against expectations, Nissan’s chief executive survived the ousting of Carlos Ghosn, a damning corporate governance probe, accusations that he signed off falsified documents, a collapse in investor support and a 95 per cent plunge in quarterly profit at the Japanese carmaker.

But Mr Saikawa’s admission last week that he was improperly overpaid finally tipped the scales.

The board unanimously agreed on Monday to remove him in a week’s time, ending a 2½-year tenure overshadowed by quality scandals and persistent doubt about his management capability following the arrest of Mr Ghosn.

Mr Saikawa’s forced departure and the search for a new chief are pivotal events for the company and for its alliance with France’s Renault. His exit leaves Nissan looking for a leader who can pull off the triple feat of resuscitating a Japanese icon, navigating a potential four-way global merger and making a clear break with the Ghosn era.

The new chief, who the Japanese carmaker aims to identify by the end of next month, is set to face challenges that are potentially more complex than when Mr Ghosn rescued the group from near bankruptcy in 1999.

Back then, Nissan’s financial troubles were even deeper, requiring a capital injection from Renault. But Mr Ghosn’s solution – deep cuts in the workforce, car plants and suppliers – was straightforward at a time when the automotive industry was focusing on combustion engine vehicles.

Two decades on, in an industry facing fundamental disruption from the shift towards electric and self-driving vehicles, Nissan’s nomination committee is scrambling to find a new saviour from at least six candidates, according to people familiar with the search.

Whoever gets the job will inherit a daunting in-tray.

The Japanese carmaker is struggling in almost all its key markets, and in July said it would cut 12,500 jobs globally in a broad overhaul. As its performance stalled, management was preoccupied with a 10-month internal investigation into Mr Ghosn and with the breakdown in ties with Renault.

“From rebuilding its businesses in the US and Japan, product development, and management structure to recovering profitability and brand value, there are loads of issues the new chief executive will need to address,” said Koji Endo, head of equity research at SBI Securities.

The rewards could be significant if the Japanese group can find a permanent fix to its in-limbo relationship with Renault, which historically was held together by Mr Ghosn’s diplomatic skill and force of will. Mr Saikawa’s exit, people close to the companies say, could also revive negotiations over the future of an alliance that has the potential to evolve into the world’s largest car group.

But in the short term, the new boss will have the awkward task of appearing in the Tokyo district court to plead guilty, on behalf of the company, to charges that Nissan falsified Mr Ghosn’s pay in its financial statements.

Mr Saikawa has not been accused of any wrongdoing, but internal calls for his resignation grew after he admitted to improperly receiving extra pay of about $440,000 (€400,000) in 2013 as part of an incentive scheme that paid out cash depending on Nissan’s share price performance.

Morale within the business and regard for Mr Saikawa among staff had sunk to dismal lows. One employee responded to Monday’s news of the chief executive’s impending departure by sending pictures of champagne to friends.

With the criminal trial set to begin sometime next year, Mr Ghosn’s defence team has said he will vigorously defend against allegations of financial misconduct, all of which he denies. The legal battle also could shine an uncomfortable light on Nissan’s co-operation with Tokyo prosecutors in the recently concluded investigation of its former chairman.

“The trial will obviously be a huge time diversion for anybody who wants to focus on improving the core business,” said Macquarie analyst Janet Lewis.

While Nissan has been distracted, there have been a flurry of deals as the automotive industry shifts towards electric vehicles. Toyota invested in Uber’s self-driving unit and smaller rival Suzuki, while Ford and Volkswagen have strengthened their ties to collaborate on electric vehicles and self-driving technology.

“With so many doubts about Mr Saikawa’s future, Nissan has not been in a situation where it can focus on its turnaround plan,” said Takaki Nakanishi, an automotive analyst who runs his own research group. “In this age of rapid changes, a delay of three months can be fatal and Nissan has already lost valuable time.”

With the FCA keen to revive talks with Renault, people close to Nissan say the new chief must possess an international background and tough negotiation skills to demand a fix to its capital structure with Renault before any such talks resume. Renault owns a 43 per cent stake in Nissan, contrasting with the Japanese group’s 15 per cent non-voting stake in the French carmaker.

A change at the top at Nissan could be a breath of fresh air for the strained alliance, according to people close to Renault. They say Renault chairman Jean-Dominique Senard, who sits on the Nissan board, has long thought Mr Saikawa was “overwhelmed” by the many challenges in front of him.

“The logical order is a new CEO, an implementation of the turnaround plan, and then engagement with Renault about the FCA deal,” one of the people said - though that sequence could take more than a year: “There’s only so many problems you could solve at the same time.”

While Nissan searches for Mr Saikawa’s successor, chief operating officer Yasuhiro Yamauchi will serve as caretaker chief executive. He is widely considered a safe pair of hands due to his experience as alliance executive and a sitting member of Renault’s board.

Investors in both Nissan and Renault are optimistic he will be more open to engaging with the French carmaker and the FCA, and sent shares in the Japanese group up as much as 4.8 per cent on Tuesday.

“Anything that increases the credibility of the management team helps Nissan and helps the alliance,” Thierry Bolloré, Renault’s chief executive, told reporters at the Frankfurt Motor Show.

The shortlist also includes Jun Seki, who has been charged with implementing Nissan’s turnaround plan following a successful run as head of its China business, and his successor as China boss, Makoto Uchida, according to people with knowledge of the list.

But the names on that list could fluctuate over the next few weeks and even if Nissan identifies the perfect candidate, that person may not want the job.

“The company is deeply divided at the moment,” Mr Nakanishi said. “A CEO from the outside might be good, but who would be willing to set foot in this minefield?”

Carlos Tavares, the 61-year-old chief executive of PSA successfully saved the French carmaker from collapse, thanks to a ferocious attitude to cost-cutting adopted during his time working under Mr Ghosn at Renault. His presence, however, would not be welcomed by Fiat Chrysler, which hopes to eventually restart merger talks with Renault.

Didier Leroy, the high-ranking Toyota executive knows both Japan and his native France well, giving him the diplomatic skills to navigate the vagaries of the alliance. But Toyota is a fierce rival to Nissan, and with the potential for retirement looming, Mr Leroy (61) may not want to switch jobs.

Daniele Schillaci, the former Nissan sales and marketing boss left this year to run Italian supplier Brembo, but Mr Schillaci (54) has extensive experience at both the Japanese group and Renault. He is said to be Mr Saikawa’s preferred candidate, though that may no longer be an advantage.

Yasuhiro Yamauchi (63), with a purchasing career at Nissan spanning nearly four decades, the chief operating officer is considered a solid caretaker chief executive. With his experience as an alliance executive and member of Renault’s board, he is considered more open to restoring Nissan’s ties with the French carmaker and holding talks with FCA than was Mr Saikawa.

Jun Seki (58), the former head of Nissan’s China business, was assigned the pivotal role of overseeing the company’s recovery plan in May, prompting speculation that he was being groomed to replace Mr Saikawa.

Makoto Uchida (53), Mr Seki’s successor as China boss spent more than a decade at a Japanese trading house before joining Nissan in 2003. Internally he was considered a candidate for the top role after he took over the China business in May, a critical market for the carmaker as it struggles in the US.

Is Coveney the right man to lead Greencore out of Covid-19 crisis? 07:48
State may face €1bn in compensation in Covid-19 case, Press Up claims 07:47
Greencoat Renewables announces €100m share placing 07:44
Hospitality compensation claim, smart homes and SIMple pleasures 06:40
Keep an eye on your heart with the Withings BPM Core 05:44

1 Ireland must beware as digital tax reform enters critical phase
2 Fiona Reddan: Who’s afraid of Revolut? Not AIB and BOI it seems
3 How I managed to cut my mobile phone bill by at least a half
4 State may face €1bn in compensation in Covid-19 case, Press Up claims
5 Son putting elderly dad under pressure to sign over land
6 Lahinch Golf Club runs out of its own cash after €3m Covid-19 hit
7 Salesforce in talks to buy Slack in huge cloud software deal
8 Is Coveney the right man to lead Greencore out of Covid-19 crisis?
9 Reopening businesses can claim ‘restart week’ payment
10 Workhuman predicts double-digit growth for 2020 as revenues soar
Real news has value SUBSCRIBE