Manufacturer is undergoing a costly restructuring 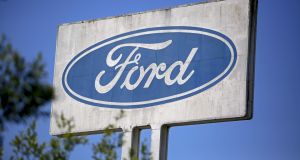 Ford has said it will take charges totalling $11 billion in a restructuring aimed at improving profitability and better positioning itself to capitalise on new technologies including electric and self-driving vehicles.

Ford’s credit rating has been cut to junk by Moody’s Investors Service, which cited weak earnings and cash generation as the carmaker undergoes a costly restructuring.

The company, which has about $100 billion (€90.64 billion) of debt globally, in the form of bonds and loans, is trying to retool its business “from a weak position as measures of cash flow and profit margins are below our expectations, and below the performance of investment-grade rated auto peers”, Moody’s said in its report.

Ford has said it will take charges totalling $11 billion in a restructuring aimed at improving profitability and better positioning itself to capitalise on new technologies including electric and self-driving vehicles. The company has announced job cuts and plant closures in Europe, while also reducing salaried staff across the globe.

It also has formed an alliance with the German carmaker Volkswagen in which they will share development costs on electric cars.

Shares in Ford were down more than 3 per cent in after-hours trading following the Moody’s announcement, having been up more than 2 per cent during the day’s formal session. The stock had gained 25 per cent since the start of 2019, as of Monday’s closing price.

Moody’s cut the rating on Ford’s bonds one notch from Baa3, the lowest investment grade rating, to Ba1, the highest rung of the junk bond scale. The other two major credit rating agencies, S&P Global Ratings and Fitch, each have investment-grade ratings for the company.

The yield on Ford’s 10-year bond, issued earlier this year, shot higher following the announcement from Moody’s, rising 15 basis points to 4.93 per cent.

“The erosion in Ford’s performance has occurred during a period in which global automotive conditions have been fairly healthy,” Moody’s said.

“Ford now faces the challenge of addressing these operational problems as demand in major markets is softening, and as the auto industry is contending with an unprecedented pace of change relating to vehicle electrification, autonomous driving, ride sharing, and increasingly burdensome emission regulations.”

The downgrade raises the risk that Ford could end up in high-yield market indices, where it will be a significant presence. According to Bank of America Merrill Lynch analysts, $34.5 billion of Ford’s US bonds would be eligible for inclusion and would represent 2.9 per cent of the total US high yield market.

The debt remains in investment-grade bond indices for now, however, since a majority of the rating agencies still have an above-junk rating. S&P said in July that it expects to downgrade the company by one notch sometime this year, but that it would still maintain an investment grade rating on the company.

“A two-notch downgrade to a speculative-grade rating is unlikely over the next 24 months unless a higher risk of a US recession coincides with a lack of profitability improvements in Europe and China, which – together – would reduce the cash cushion Ford would need to withstand the next downturn,” S&P wrote in its most recent report.

Investors have become concerned in recent years over the rising numbers of companies happy with issuing debt at the very lowest rungs of investment grade. They fear worsening economic conditions could imperil companies’ ability to service bloated debt loads, leading to downgrades.

Prices could then fall precipitously, since some bond fund managers would be forced to offload the debt, bound by strict investment mandates that prohibit holding lower-rated bonds.

But some analysts and investors downplayed the impact of Ford’s downgrade.

“I think the Ford situation is understood by investors to be sufficiently idiosyncratic,” said Hans Mikkelson, a strategist at Bank of America Merrill Lynch. “This is not a sign that you are going to see a raft of downgrades from triple-B to high yield.” – Copyright The Financial Times Limited 2019

1 Lockdown exit: How can Irish economy reopen without big health risks?
2 Bank puts business owner on hold for month on Covid finance
3 Amazon fly dedicated aircraft into Belfast to fill online orders
4 Deliveroo branches into grocery deliveries in Ireland
5 Diageo withdraws full-year forecast in face of global Covid shutdown
6 Why we should be slow to use tracking apps in coronavirus response
7 Government measures will ‘significantly’ support incomes, ESRI says
8 Half of Irish SMEs expect revenue to fall by at least 60% in next three months
9 Government announces €1bn in supports for businesses
10 Hibernia Reit in strong position but coronavirus impact unknown
Real news has value SUBSCRIBE