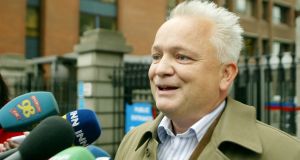 Eddie Wilson’s new job as chief executive of Ryanair DAC means the public could see more of him.

There is more to running an airline than industrial relations, but that has been one of the big stories at Ryanair since December 2017, when it agreed to recognise trade unions. The move thrust chief people officer Eddie Wilson into the spotlight as he led talks with organisations representing pilots and cabin crew across Europe.

Ryanair has done deals with most of them, although it faced industrial action here, and Portugal, Spain and the UK this summer. Wilson was quoted in newspapers and on radio and television this month after the airline got a High Court order halting a strike by members of the Irish Airline Pilots’ Association, part of trade union Fórsa.

Wilson’s new job means that the public could see more of him. He is taking over as chief executive of Ryanair DAC, the biggest constituent airline of Ryanair Holdings, which is the parent of that carrier, Buzz in Poland, Lauda in Austria and Malta Air.

Dubliner Wilson (55) will run the Ryanair known to most Irish people and the one that is a familiar sight around Europe. It is responsible for most of the 150 million people that will have flown with the group over the 12 months to March 31st.

Michael O’Leary has been chief executive of that business for 25 years, but signed a new contract this year to run the holding company from April 1st, 2019, which he is doing with a small team of legal and financial executives.

Ryanair DAC is likely to remain the largest part of the group, but will compete with the others for cash and craft from the parent, which O’Leary said could look at buying other airlines.

Wilson’s first challenge could be to oversee Ryanair DAC’s share of the up to 900 pilot and cabin crew jobs that the group plans to cut this winter as it slows growth in the face of delays in the delivery of new Boeing aircraft.

While there may be more to running an airline than industrial relations, a knowledge of it could help Wilson in coming months.