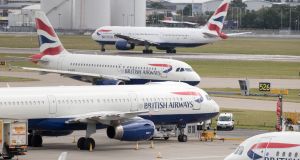 The threat of further strikes comes a day after pilots union Balpa said it had offered to call next week’s strike off if BA agreed to fresh talks over a new pay deal.

The union representing British Airways’ pilots is considering further strikes beyond the first walkouts in the airline’s history next week if the UK carrier refuses to go back to the negotiating table.

The warning comes as Britain’s flag carrier is set to face pilot strikes on Monday and Tuesday, with about 1,600 flights at risk of being grounded, affecting up to 280,000 customers. The majority of flights on these days have already been cancelled.

The 48-hour walkout will be followed by another strike on September 27th but the British Airline Pilots’ Association (Balpa), which represents the majority of BA’s pilots, said it would not rule out further strikes as tension between the union and BA escalates.

“We’ll take stock after the strike action next week. We hope to see BA at the negotiating table but if it doesn’t happen then we’ll have to consider next steps, and as part of that further strikes are not ruled out,” said Brian Strutton of Balpa. He said BA had “shut down” all dialogue with the union, calling it “pretty dismal”.

The threat of further strikes comes a day after Balpa said it had offered to call next week’s strike off if BA agreed to fresh talks over a new pay deal. But BA said it would only meet for “constructive talks” if there was no precondition to it.

BA said it did not “believe the union is acting in good faith by making an eleventh hour inflated proposal which would cost an additional £50million (€55.8 million)”.

BA added: “Balpa has cynically waited until we have helped the vast majority of customers with alternative travel arrangements, and our planning for a strike has reached a critical stage. Our customers need the certainty that Balpa will call off the strikes for good, not just for two days next week.”

The three days of walkouts were announced ahead of the August bank holiday weekend, as BA was celebrating its 100th birthday. The airline was thrown into chaos as it struggled to cope with the deluge of customers attemd to apologise after it admitted that some passengers were mistakenly told by email that their flights scheduled on non-strike days had been cancelled. – Copyright The Financial Times Limited 2019

1 ‘My rent here is so low it’s a joke’
2 This charming man: how Paschal Donohoe won the Eurogroup presidency
3 Goodbody’s planned €155m sale to Bank of China falls through
4 Legal tech start-up aims to make DIY divorces easier and cheaper
5 Caveat: The tourism sector deserves to be taken more seriously in this crisis
6 ‘Sad day’ for House of Ireland as tourism retailer goes out of business
7 Donohoe’s new role puts State at centre of debate over EU’s future
8 Voxpro founders invest €250,000 in Republic of Work
9 Coronavirus: Over 1m workers may face tax bills of up to €2,800 at end of the year
10 Two Irish entrepeneurs shortlisted for leading innovators prize
Real news has value SUBSCRIBE