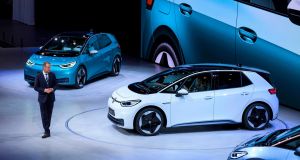 The Government’s current target of having one million electric vehicles on our roads by 2030 is unattainable, the Irish motor trade has warned in a letter to all members of the Oireachtas this week.

The industry has also called for a delay to any proposed changes in the current motor tax regime for at least a year, given the uncertainty over the impact of Brexit.

In the letter seen by The Irish Times, the Society of the Irish Motor Industry (Simi) says the electric vehicle targets cannot be achieved because car manufacturers are aiming to offer fully electric vehicles by 2040 so they are on a different timetable to the Government. This means “the supply and pricing of electric vehicles will not be available in the medium term”, it says.

And it warns that any tax strategy aimed at adding punitive rates on regular petrol or diesel cars in an effort to drive buyers to opt for electric is flawed “as it ignores the fact that internal combustion engines are already significantly taxed and are already outside of the disposable income of the vast majority of the population, and that electric vehicles are still so expensive and supply so limited that the substitution ambition will not happen”.

Separately a senior Irish motor executive has called on the Government to consider a tax charge based on the age of used imports to prevent the UK motor trade dumping older, dirtier cars on to the Irish market.

Stephen Gleeson, managing director of Hyundai Ireland, is calling for a system where used imports face a significant tax charge that rises for every year since the vehicle’s first registration. Speaking at the Frankfurt motor show, Mr Gleeson said: “The Government needs to bring in a fixed charge on all petrol and diesel imports in order to limit the flood of older, more polluting used imports from the UK.”

Tackling climate change was a dominant theme on the first day of the Frankfurt show, with car company bosses putting environmental issues and electric cars at the heart of their presentations, and facing protestors outside.

VW chief executive Herbert Diess urged governments to quit coal and make changes to taxing carbon dioxide emissions, while singling out the transport sector, including cars, for creating 14 per cent of global CO2 emissions. However, he added that there were concerns about how the high levels of investment required on cleaner tech was coinciding with ongoing international trade tensions, along with Brexit.

Mr Diess warned that “China is basically a healthy market but, because of the trade war, the car market is basically in a recession. So that’s a new situation. That’s scary for us.”

Meanwhile, BMW’s chief financial officer Nicolas Peter said the carmaker would reduce output at its Mini plant in Oxford by eliminating a work shift should the UK opt for a hard Brexit. “We’d have to increase prices, and we have to curtail production to react to such a development,” he said.