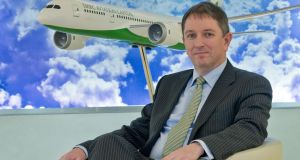 A $1 billion (€884 million) boost from its parent has left aircraft lessor SMBC Aviation poised to cash in on demand from airlines to replace their fleets.

S&P re-rated SMBC to A- from BBB+, ranking it as a particularly secure bet for lenders.

A similar rating from another agency, Fitch, gives SMBC the joint highest rating in its sector, implying that it can borrow money at a lower cost than many rivals.

SMBC buys aircraft from manufacturers such as Airbus and Boeing which it then leases to airlines. The company purchases the craft with a combination of its own cash and borrowings. Speaking yesterday, SMBC chief executive, Peter Barrett, said that the company was likely to use the cash from its shareholders to fund activities into the early years of the next decade.

Mr Barrett said SMBC would continue to focus on markets such as Asia, where demand for air travel and air craft are growing on the back of expanding populations and increased wealth.

Nevertheless he noted that many airlines in established markets such as Europe are planning to replace craft with new models that burn less fuel and can fly over greater distances. At least one customer with which SMBC is in talks plans to renew its entire fleet over the next five years.

He welcomed S&P’s rerating. “It will give us some competitive edge as the market changes and develops,” he said.

“Fuel costs are higher, interest rates are higher and labour costs are going up,” he said. However, he pointed out that growth was continuing in many markets.

1 Chris Johns: Past is another country when it comes to our post-pandemic future
2 Citigroup warns that markets are out of step with reality
3 If you injure yourself working from home, is your employer responsible?
4 US ‘hard seltzer’ drink White Claw launches in Ireland
5 ‘The recovery needs to be a full-scale economic renewal’
6 Household savings soar as consumers stop spending
7 Ryanair expects air fares to fall when flights take off again
8 Donohoe told insurers they risked ‘irreparable damage’ to reputation
9 Tobacco makers still trying to make a mint from Irish menthol market
10 Michael Smurfit: ‘I asked Trump to invite me to the White House for my 80th birthday’
Real news has value SUBSCRIBE