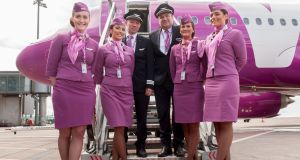 Wow’s financial woes emerged in September, after running the rule over its books. Photograph: Brian Lougheed

Aircraft financier Avolon has taken back control of four aircraft that it had leased to Wow Air, the troubled Icelandic budget airline.

Wow’s future is in doubt as its bigger rival Icelandair yesterday dropped plans to buy the smaller carrier, whose financial woes emerged in September, after running the rule over its books.

It is understood that Dublin-based Avolon has moved four craft that it has leased to Wow, although it has not terminated the agreements to provide the planes to the Icelandic carrier.

The move allows Avolon to maintain control of the craft, while leaving it open to the company to return them to Wow should its troubles pass.

Avolon took the step to pre-empt any difficulties that could potentially arise should Wow become insolvent.

The craft in question are two Airbus A330s and two A320s. It is understood that Avolon has redeployed them elsewhere.

The Irish company has not commented but Wow issued a statement this week saying that it had returned four craft to lessors as part of a restructuring.

Aircraft financiers such as Avolon buy planes from manufacturers and lease them to airlines in return for rent and other payments. The agreements allow lessors to keep tight security over their craft.

Founded by tech multi-millionaire, Skúli Mogensen, Wow offers cheap flights from Europe, including the Republic, to Iceland’s main airport, Keflavik, and from there to various US and Canadian cities.

The airline borrowed €60 million through a bond sale in September, but higher fuel prices and tougher terms sought by aircraft lessors squeezed its cash flow.

Icelandair pledged to buy Wow earlier this month, once its terms were met by today, Friday November 30th, but said yesterday that it was not going ahead with the deal.

Bogi Nils Bogason, Icelandair’s interim chief executive, confirmed that the company would not buy its competitor. “This conclusion is certainly disappointing,” he said.

Wow had also hoped to raise about €22 million by selling craft to an aviation financier and leasing them back but that also fell through.

Svanhvit Fridriksdottir, Wow’s spokeswoman, said yesterday that the airline was making progress with other opportunities but gave no details. She stressed that the merger’s failure would not hit flights.