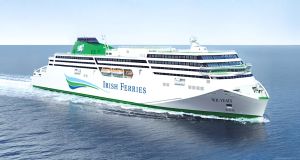 The WB Yeats, which is due to be delivered to ICG in early December.

Revenue at ferries operator Irish Continental Group (ICG) fell 1.3 per cent in the first 10 months of the year as a result of sailing disruptions and schedule changes, the company said on Thursday.

Group revenue dropped by €3.6 million to €285.3 million reflecting changes in the ferries division, but that was offset by growth in the container and terminal division.

Turnover in the ferries division fell 6.7 per cent to €172.1 million, €4.9 million of which is attributable to lower charter earnings after the sale of the MV Kaitaki in May 2017 and the Jonathan Swift in April 2018.

The volume of cars Irish Ferries carried decreased by 7.2 per cent to 365,400 on the back of a 7.3 per cent loss in sailings. Freight carryings dropped marginally, again linked to a loss in cruise ferry sailings.

ICG’s WB Yeats vessel, which was due earlier in the year, will be ready for delivery in early December, the company said in a trading update.

“ICG would like to apologise once again for any disruption caused to our tourism and freight customers due to the delay in FSG delivering the ship, a delay that was an extraordinary event totally outside the control of ICG,” the company said.

While update flagged “heightened uncertainty” surrounding Brexit, revenues in the container and terminal division were a brightspot for ICG. Turnover in that part of the businesses increased 8 per cent to €120.1 million.

ICG was forced to cancel a series of bookings on its new WB Yeats ferry that was scheduled to begin travelling to France this summer.

The delivery of the €147 million vessel to Ireland had been delayed by German shipbuilder FSG which, in a statement, attributed the delay to receiving parts late from suppliers.

Additionally, the company’s Ulysses vessel was forced to enter dry dock in the summer for a number of weeks on the back of technical difficulties.

“With the WB Yeats ready for delivery in early December, cheap funding, a great balance sheet and falling fuel prices, Irish Continental Group is set for a recovery in 2019,” Davy analyst Stephen Furlong wrote in a note to clients.