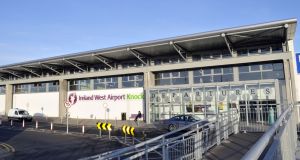 Aeronautical revenue includes income from landing fees and charges, fuel income and development fee income, while the commercial income is from the airport’s shops, restaurants, car parking and vehicle hire.

Passenger numbers at the airport rose by 2 per cent year-on-year to almost 750,000 as it served flights to 23 international destinations.

Visitor numbers from Britain increased in 2017, with the airport welcoming an additional 18,000 passengers travelling to and from the UK, a 3 per cent increase on 2016.

The airport, which employs 136 staff, expects to increase its passenger numbers by 3 per cent this year to 775,000, helped by the addition of 16,000 seats on a number of Flybe services, and an increase in Ryanair’s route capacity to Milan and Bristol. Additionally, TUI Holidays began a new service to Palma Majorca in the summer.

At the time the accounts were filed, the directors said they were confident the passenger target for this year would be reached, despite adverse weather at the beginning of 2018.

“The airport is continuing to take actions to expand its international route network and establish access into the mainland European markets of Germany, France and the Netherlands in addition to the east coast of the US,” the directors noted.

In 2019, the airport expects passenger numbers to reach 800,000 thanks to a new Ryanair service to Cologne and additional capacity on services to Barcelona, Alicante and Bristol, a spokesman told The Irish Times.

While passenger numbers are increasing, Knock has a series of infrastructural upgrades in the pipeline, including a runway overlay and an upgrade of its instrument landing system, which takes place in May 2019.

Although reliant on government support, Knock’s cash and bank balances increased by 114 per cent to €10.1 million last year after investment from seven local authorities in return for a 17.5 per cent stake. That investment will support work on critical infrastructure and development of new route access, a spokesman said.