The Ritz London could be up for sale for £800m 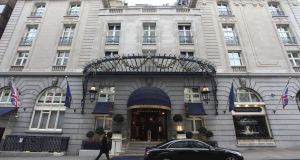 A doorman walks past the main entrance to The Ritz hotel in London. Photograph: Chris Ratcliffe/Bloomberg

The Ritz London, one of the most prestigious hotels in the world, could be put up for sale after its businessmen owners David and Frederick Barclay received several unsolicited offers for the establishment in Piccadilly.

The directors of the hotel said last month they believed its value was more than £800 million (€888.7 million), given its freehold tenure, location near St James’s and Buckingham Palaces, quality of the building, casino lease and brand name.

They said in the accounts “the business is not and has not been marketed for sale”.

The Barclays, who also own the Daily Telegraph newspaper, however had received a number of unsolicited bids for the hotel, according to source close to the brothers.

Opened in 1906 by Swiss hotelier Cesar Ritz, the hotel became a favourite of royalty, politicians and film stars.

It had a turnover of £47 million in 2018 and made an operating profit of £15 million, according to accounts filed last month.

A representative of the Barclay brothers declined to comment. – Reuters