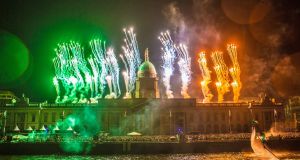 A programme of events for this year’s New Year’s Festival is expected to yield a €10 million boost for Dublin’s local economy while tourism chiefs have said it will help counter the threat of Brexit to the industry.

The festival, which is now in its eighth year, will involve four events over December 31st and January 1st. It attracted about 24,000 people into the city centre last year, about a third of which were international visitors.

Fáilte Ireland chief executive Paul Kelly said the festival forms a key part of the organisation’s Dublin strategy. “A lot of people – particularly in the age bracket of 25-40 – are regular international travellers across New Year’s Eve,” he said.

“Last year we had 5,000 international visitors who came to Dublin specifically for the event. That figure has been growing over the years as the event has become stronger.

“We also capture footage from the event which gets shown on international newsreels where they are showing New Year’s Eve being rung in. Every year we’re getting more and more coverage of Dublin being beamed around the world.

“Obviously with the challenges now being faced by the tourism industry in terms of Brexit in particular, and also a general softening in global travel, all events like this become even more important.”

The festival will begin with the Liffey Lights Midnight Moment Matinee at the Custom House at 6pm. It will feature a countdown at 7pm to facilitate children. There will be laser lights and aqua beams with music. Tickets are free.

Later, the Liffey Lights Midnight Moment will feature a “solar symphony of lights” with up to 100 aqua beams, lasers and search lights accompanied by music created especially for the event. It will start at 11.30pm and is free of charge.

The Countdown Concert, an over-18s event, features Walking on Cars as well as Ash, Aimee, and Lisa McHugh at the Custom House from 8pm. Tickets are €36.90 including booking fee and go on sale on October 18th at 9am at nyfdublin.com.

On New Year’s Day, there will be a “family-friendly” concert in Temple Bar featuring Kíla and a host of other musicians. There will also be pop-up street performances. The event is free of charge.

Lord Mayor of Dublin Paul McAuliffe said the festival was an important event in terms of “putting Dublin on the map” internationally.

“You’re competing with other cities right across the world in terms of this event, and it’s important because it supports the local economy at a time when the season is lower than the summer time or St Patrick’s weekend,” he said.