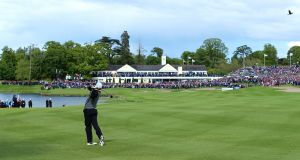 Rory McIlroy in action at the K Club in Straffan, Co Kildare, in May 2016. Photograph: Andrew Redington/Getty Images

Accounts for 2018 filed in the last week for Bishopscourt Investments, the company that runs the complex, show that sales at the K Club fell by almost 7 per cent to just over €17.5 million.

The performance will be seen as further evidence that the Irish hotel market has passed its peak after a near seven-year expansion.

The K Club made a loss for the year of €3.7 million, up from a loss of €3.2 million the previous year. The shareholders’ deficit on Bishopscourt’s balance sheet now stands at €16.7 million.

The K Club has been for sale since last year, initially seeking offers of about €80 million. The Irish Times recently revealed that low-profile Dublin nursing homes operators and hotelier Michael Fetherston is in advanced talks about a potential deal to buy the complex for below its asking price.

A note to the Bishopscourt accounts, which were signed off only last week, said that the directors had valued the complex during the year at €65.1 million. The accounts also said that there is currently no agreement in place with any buyer.

Bishopscourt, which used to be a 50-50 venture between Mr Smurfit and property developer Gerry Gannon, bought the K Club for €97 million in 2005. Mr Smurfit bought out Mr Gannon’s interest in the resort in 2011.