Hayes says deal could see more than 2,500 jobs being saved 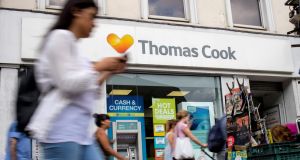 Thomas Cook fell into liquidation on September 23rd after its creditors and largest shareholder failed to agree a deal to save the travel company. Photograph: Getty

Thomas Cook’s shop estate has been bought by independent travel agents Hays Travel in a deal that could see it re-employ many of the collapsed travel firms former employees.

Hays, which is the UK’s largest independent travel agent, has agreed to buy 555 of Thomas Cook’s 563 UK stores for an undisclosed sum. It has already recruited 421 of Thomas Cook’s employees and said it had “further offers outstanding” to others.

Hays said that more than 2,500 jobs could be saved in total.

Thomas Cook fell into liquidation in the early hours of September 23rd after its creditors and largest shareholder, the Chinese conglomerate Fosun, failed to agree a deal to save the 178-year old travel company.

Its collapse has had repercussions around the world with thousands of hoteliers left unpaid and its 21,000 employees facing redundancy.

Jim Tucker, partner at the accountancy firm KPMG, which was brought in days before the firm’s collapse to assist with any insolvency process, said the Hays deal was “an extremely positive outcome”.

“It provides re-employment opportunities for a significant number of former Thomas Cook employees, and secures the future of retail sites up and down the UK high street,” he said.

The UK high street is suffering from increasing numbers of vacant lots as customers increasingly choose to shop online and opt for food delivery instead of eating out.

The acquisition of Thomas Cook’s shops will see Hays almost triple its retail estate. It currently owns 190 shops in the UK.

Irene Hays, chair of Hays Travel, said: “Thomas Cook was a much-loved brand and a pillar of the UK and the global travel industry. We will build on the good things Thomas Cook had – not least its people – and that will put us in even better stead for the future.” – Copyright The Financial Times Limited 2019

1 Bank leaked my loan request to family who tried to rip me off
2 Ryanair and Aer Lingus monitor impact of coronavirus on travel to Italy
3 Mastercard to create 1,200 new jobs by expanding base in Dublin
4 EU and British positions harden ahead of Brexit talks
5 Boris Johnson's new immigration regime will damage much more than industry
6 UK lays down red line for Brexit trade talks
7 Over $12m from sale of Walford handed over in Sean Dunne bankruptcy case
8 Ten of the most mysterious aircraft disappearances
9 Wall St falls sharply as coronavirus fears surge
10 Penneys owner warns coronavirus could threaten some supplies later in the year
Real news has value SUBSCRIBE