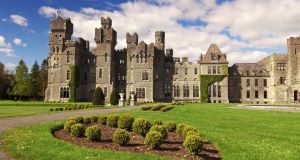 Revenue at the five-star Ashford Castle Hotel grew more than 9 per cent last year to €22.9 million, “driven by an increase in average room rates from the prior year”. recently filed accounts show.

The hotel, once voted the best in the world, saw revenue rise from €20.9 million while earnings grew by more than €970,000 to €5 million. However, the company remained unprofitable, although it improved its loss before tax to €2.14 million last year compared to €3.32 million a year earlier.

“2018 was a very strong year for the castle and the stakeholders are very pleased with the revenue performance,” said Niall Rochford, general manager of Ashford Castle.

Mr Rochford noted that the company began a number of capital expenditure projects last year including construction of a swimming pool at its sister property - the Lodge at Ashford - doubling the footprint of its falconry school and building an all-day American diner on the estate called Stanley’s.

Asked about its unprofitable position, Mr Rochford said: “The most important thing for Red Carnation is that we’re delivering on an international level of service that would be expected by the international traveller.”

He added that 2018 was its second full year of trading since completing a $75 million (€64 million) upgrade, “so we’re at a very early stage in terms of our revenue potential and our profitability and our intention is to return to profitability in the next number of years”.

Ashford saw an uptick in tourists using private jets and flying to Ireland West Airport Knock last year, Mr Rochford said, adding that “Ireland is on the high high end as a luxury traveller destination of choice”. He said Ashford that more than 300 of the private jets that landed in Knock last year were carrying tourists destined for Ashford.

Staff numbers at the 365-acre Cong, Co Mayo, estate increased from 266 to 274 while wage and salary costs rose by 5 per cent to just over €7 million.

Meanwhile, Ashford is owed €4.9 million from another group company, The Lodge at Ashford Castle Limited, which controls a 64-bedroom property formerly known as Lisloughrey Lodge. That property was acquired by the South African owners of Ashford, Red Carnation Hotels, in 2014 for an undisclosed sum.

The couple acquired the hotel, which hosted US president Ronald Reagan during his State visit to Ireland in 1984, in 2013.

In terms of outlook, Mr Rochford said that 2019 has been a similar year to 2018 taking the VAT increase into consideration which, he says, has put pressure on trying to improve the average room rate in the hotel. Occupancy has improved, he said. And even though about 65 per cent of Ashford’s guests are from the US, he noted that Brexit will likely have an impact.