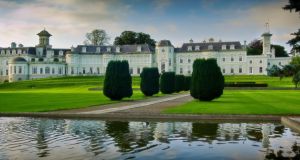 Michael Fetherston, a low-profile Dublin nursing homes operator and hotelier, has emerged as the preferred bidder to buy the K Club golf resort, which was put on the market last year by Michael Smurfit seeking up to €80 million.

Under the deal on the table, Mr Smurfit will not retain ownership of his course-side villa at the K Club, which he had at one stage hoped to keep.

Apart from Mr Fetherston, it is understood that two other bidders, both foreign-based investors who own existing Irish hospitality assets, remain interested in buying the Kildare five-star resort that hosted the Ryder Cup golf tournament in 2006.

However, Mr Fetherson is considered the clear front runner and discussions are at an advanced stage. A sale is expected to be wrapped up in coming months at a price below the €80 million that Mr Smurfit sought.

He has also been associated since the 1990s with the Clifton Court hotel on the north bank of the river Liffey in Dublin’s city centre. Sinnan Inns, the company through which he owned the hotel, had a receiver appointed in 2016 by a Goldman Sachs fund that bought its debts from the carcass of Anglo Irish Bank.

Sinnan’s receiver stood down in 2017, however, after the proceeds of a €2.6 million land sale was passed on to Goldman, company filings suggest. Mr Fetherston also injected almost €900,000 in fresh equity into the company.

His pub interests have in the past also included a bar in Raheny in north Dublin, as well as Viva, which was a popular boomtime nightspot that operated on busy South William Street in Dublin city centre.

Lencove Taverns, which held some of Mr Fetherson’s pub interests, also had a receiver appointed in 2016 by the Goldman fund, but the receiver was stood down in February this year, two years after a €630,000 assets sale.

Details of the financial performance of Mr Fetherston’s nursing home operation are ultimately shielded from public view behind an unlimited company. Official records suggest it received at least €6 million in income in 2016 from the State’s Fair Deal scheme for nursing homes.

One of the main subsidiaries in the group, TLC Centre, had shareholders funds of almost €3 million in its most recent accounts, and owned property worth about €13 million.

A related company, TLC Health Services, which supplies nursing staff to the five TLC facilities, had sales of €18 million and employed about 750 workers.

The K Club bid is not Mr Fetherston’s first foray into the business of golf. TLC is a prominent supporter of golf events and it is currently a main sponsor of the Irish PGA Championship, a tournament for Irish professional golfers. Mr Fetherston is also a prominent member of Luttrellstown Castle, a high-end golf course near his Dublin base of Castleknock.

Mr Fetherston did not respond to calls, texts and emails seeking comment on his bid for the K Club. Savills, the agent handling the sale, also did not respond.

Mr Smurfit said last night that he was selling the hotel because he thought the resort’s “interests will be better served under new ownership”. He would not comment on the identity of the likely buyer, but said there was “more than one bidder interested”.

Bishopscourt Investments, which was a 50-50 venture between Mr Smurfit and property developer Gerry Gannon, bought the K Club for €97 million in 2005. Mr Smurfit bought Mr Gannon’s interest in the club in 2011. The complex, which includes two championship courses and a five-star hotel, lost €3.1 million in 2017, its accounts show.

State should give us all the gift of Paschalbonds 05:38
Unprecedented hit to Irish economy as unemployment claimants exceed 500,000 05:35
Covid-19: Westport braces for tough times ahead 05:26
An Post sees big jump in people opening new current accounts 05:13
Overseas-owned Irish banks hold off on dividends 05:05