Rooms with a view: Westin goes big on comfort and privacy

Five-star hotel has added new bedrooms and expanded its atrium 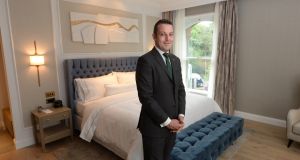 Eamonn Casey, general manager of the Westin Dublin, in one of the new bedrooms. Photograph: Dara Mac Dónaill/The Irish Times

The five-star Westin Hotel in Dublin has added 19 new double rooms above the neighbouring AIB branch on Westmoreland Street as part of a €5.5 million extension and refurbishment of the property.

The new rooms, which offer views of Trinity College, were occupied for the first time on Wednesday night, with rates of €795 a night for the largest of the rooms, which has 35sq m of space.

The bedrooms all have king-sized beds, 55-inch television screens, and high-end bathroom facilities, soft furnishings and Irish art. They also have a double layer of double glazing to reduce the outside noise from what is a busy traffic junction.

The Westin, which is part-owned by American billionaire John Malone, has also refurbished and expanded the Atrium lounge on the first floor, by expanding into the AIB building next door. This has increased the capacity of the lounge to 130 from 85 previously, with the addition of two library-style areas.

“We’ve tried to offer a bit more privacy to guests while also making it a bit more enjoyable and comfortable to use the space,” Eamonn Casey, general manager of the Westin Hotel, told The Irish Times.

The Westin was acquired in 2013 by MHL, a company controlled by Mr Malone and Irish property players John Lally and Paul Higgins. They also own the neighbouring property that houses AIB and has frontage onto both Westmoreland Street and College Street. This expansion brings the number of bedrooms at the Westin to 191.

AIB will continue to operate its bank branch at street level but has vacated the upper floors, which were used as offices.

Mr Casey said the next phase of investment at the Westin would involve the development of a presidential suite on one of the upper floors above the bank branch. This will cost about €1 million, and will offer 1,000sq ft of open-plan space to guests. The suite will carry a rate of between €4,000 and €5,000 a night, Mr Casey said.

The Westin’s occupancy rate is running at about 91 per cent, with the company likely to record revenues this year of about €21 million, similar to the level achieved in 2018, according to Mr Casey.

Earlier this year, the Westin completed a separate €1 million investment on the facade of its buildings.

“There is a strong desire from our owners to continue their investment in the hotel,” Mr Casey said. “This strengthens our position in the market and allows us to take different types of business . . . we’ll now be more open to larger groups and conferences.”