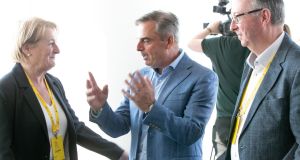 Limerick’s Adare Manor has a “very strong” chance of securing the 2026 Ryder Cup, golfer Paul McGinley has said. Speaking to The Irish Times, Mr McGinley said the recently refurbished, JP McManus-owned hotel in Adare is the “best of the best”.

“It ticks every single box you need for a Ryder Cup. There’s loads of space, loads of space for corporate hospitality, loads of space around the 18th, the golf course is really strong and in a really incredible position,” he said.

Mr McGinley, a former Ryder Cup captain, was speaking in London at the chief executive retreat of the EY Entrepreneur of the Year programme. A board member for the European Tour, Mr McGinley said he wants to see the Ryder Cup come to Adare Manor in 2026.

That, he said, requires Government backing and the promise of help with infrastructure and roads.

Asked whether that backing exists presently, he said “it’s been indicated”. “Hopefully, over the next six months when we get into making a decision as to where 2026 will go, we’ll get something in the paper, something confirmed from the Government.”

Ireland has hosted the Ryder Cup once before, in 2006, at the K Club in Straffan, Co Kildare. The competition takes place every two years and with the venue alternating between locations in the United States and Europe. This year’s competition will be held south of Paris, while Rome will host the competition in 2022.

Adare Manor received a multimillion-euro refurbishment after being acquired in 2014 by Mr McManus. Last year, the Limerick businessman revealed he would like to bring the Ryder Cup to the resort in 2026.