EY Entrepreneur of the Year: 24 companies shortlisted for award 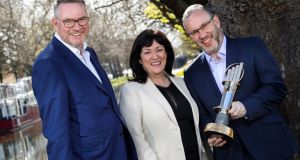 The shortlist for the 2018 EY Entrepreneur of the Year (EOY) awards, now in its 21st year in Ireland, has been released with 24 finalists selected to compete across three categories.

The 24 individuals and their companies employ more than 2,700 people and generate annual revenues of €150 million.

Shortlisted from more than 110 nominations received from across Ireland, the finalists will join more than 70 EY Entrepreneur of the Year alumni for a week of executive education and corporate insights in Oxford and London in May.

That “CEO retreat” is the country’s largest unofficial trade mission, according to EY, and forms part of a 10-month development programme.

The overall winner of the 2018 programme, designed to support, promote and connect Ireland’s entrepreneur community, will go on to represent Ireland at the World Entrepreneur of the Year in Monaco in June 2019.

“This year has been one of the most competitive years to date for nominees, and through this competition we have 24 exceptional finalists. We look forward not only to getting to know each of the finalists, but also to seeing the impact they make in the EOY community and their continued impact on the Irish economy,” said Kevin McLoughlin, partner lead for the EY Entrepreneur of the Year programme.

“We are delighted to see such strong regional representation, with finalists from all four provinces. The finalists represent a broad spectrum of Irish industries, with a significant number of entrepreneurs from the manufacturing and life sciences sectors,” he added.

Anne Heraty, the chief executive of CPL Resources and chair of the judging panel, said that the calibre of nominees has intensified this year.

“While it is never an easy task narrowing the selection down to 24 finalists, we are delighted to see the diverse range of industries year-on-year. We as judges take enormous pride in supporting the backbone of the Irish economy by highlighting Ireland’s most innovative, brave, and ambitious entrepreneurs,” she said.

In the industry category the finalists are: David Maxwell of Boojum; PJ Flanagan of H&MV Engineering; Dominic Fitzpatrick of the Irish News; Bill Wolsey of Beannchor Group; Vicki O’Toole of JJ O’Toole; Louise Kennedy of Louise Kennedy; Gareth Chambers of Around Noon; and Rachel Doyle of Arboretum.

The category winners and an overall 2018 EY Entrepreneur of the Year award winner will be announced at a ceremony in Dublin in October. The judging panel will consider a number of criteria including innovation, value creation, strategic direction, financial performance, national and global impact and the entrepreneurs contribution to society and industry.