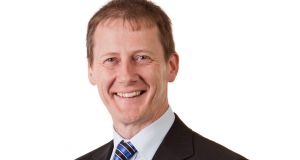 Justin Keatinge: Set up Carnivan Bay Hospitality last June with his wife, Maureen Stuart, apparently looking to emulate the experience of other short-term holiday let specialists such as Staycity, Canbe, and the Key Collection.

Last week Keatinge submitted a planning application with Dublin City Council for 22 Lower Leeson Street, through his Carnivan Bay Hospitality vehicle. His plan for the four-storey-over-basement protected structure, formerly used as an office building for several tenants, includes an extensive internal and external refurbishment of the property, as well as a change of use of the property from office to serviced short-stay tourist accommodation.

The plans would see the building converted into six guest suites, together with a reception, guest services, external terrace and staff facilities at upper ground floor/entrance level.

It’s the latest in a line of planning applications from Keatinge, who has his eyes on the lucrative short-term lettings market, and is quietly but steadily building up a significant property portfolio as he embarks on a new stage in his career. However, unlike other Airbnb-style operators, who build up often significant portfolios and then let them out to tourists on the platform, sometimes contravening planning rules and regulations by not seeking a change of use on properties they let, Keatinge is seeking planning permission for his conversions – which can slow progress.

Last June, Mr Keatinge and his wife, Maureen Stuart, established Carnivan Bay Hospitality, apparently looking to emulate the experience of other short-term holiday let specialists such as Staycity, Canbe, and the Key Collection.

In October, the company submitted an application for planning at the former presbytery accommodation at 48 Lower Rathmines Road, adjacent to the Mary Immaculate Refuge of Sinners Church, which, according to the property price register, sold for €900,000 last July. Keatinge had plans to convert the three-storey-over-basement building into a short-stay tourist accommodation with a total of eight bedroom suites, together with a reception, guest services and coffee dock at upper ground floor/entrance level. However, Dublin City Council has since refused permission, on the grounds that tourist accommodation at that location is not listed as “permissible”.

Then, just before Christmas, Carnivan submitted an application for a four-storey-over-basement building with rear return fronting Herbert Street and existing two-storey mews building fronting Herbert Lane. Plans would see the office converted to nine serviced short-stay tourist accommodation, plus a reception, guest services and coffee dock. The application received a number of objections from local residents, who feared that the development could be home to as many as 28 people, which would mean that the “disruption to the surrounding area is out of proportion for such a quiet location”.

One objection also noted that it is “socially damaging” to take long-term housing stock out of the market and replace it with short-term accommodation. The South Georgian Core Residents Association also objected, stating: “No resident wants to live next door to an Airbnb property of the scale proposed.” A final decision has not yet been made on this application.

Plans to convert and expand Abrae Court guesthouse, a two-storey, 18-bedroom-over-garden-level Victorian period building on Rathgar’s Zion Road, which was bought for in the region of €1.5 million, to offer short-term accommodation, are also afoot.

Meanwhile, in Fethard-on-Sea, Co Wexford, the couple acquired the Naomh Seosamh Hotel, closed since 2008, with a view to re-opening it later this year as an aparthotel.

1 Basic income for all: Has the Covid crisis given us a new economic model?
2 ‘I don’t need to do any of this. . .I don’t actually need to work.’
3 Promontoria barred from pursuing doctor over Ulster Bank loan
4 Only way is up for Stripe as valuation skyrockets
5 White knights or loan book cannibals – what will happen at Ulster Bank?
6 Direct sea routes to Europe offer certainty in choppy Brexit waters
7 A tale of two pandemics for Smurfit Kappa and Greencore
8 Online shoppers face unwelcome tax surprise
9 Admission of mistake in Oxford vaccine dose raises doubts over reliability
10 Kinzen raises $2.2m as it helps clients fight ‘misinformation’
Real news has value SUBSCRIBE