Now Titanic enthusiasts can visit the wreck for $100,000 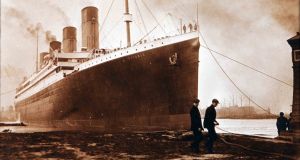 Titanic stopped off at Cobh, Co Cork, in 1912 before steaming west on its maiden voyage towards the United States.

Deep sea exploration company OceanGate Expeditions is offering sea-wreck enthusiasts the trip of a lifetime – to travel to the bottom of the Atlantic to explore the wreck of the “unsinkable” Titanic.

The US firm based in Washington state is looking for “mission specialists” for the six-week expedition, which will depart from St John’s, Newfoundland. Scientists will join the tourists on board for the series of week-long missions. Only nine positions are available on board for each trip.

Unfortunately plans to run trips this year have had to be postponed after the firm’s submarine was struck by lightening, causing damage to 70 per cent of its electronics and delaying its testing schedule. Instead the firm is running six expeditions in 2019, some of which are already sold out.

Each trip will include about three hours spent exploring the wreck in a submersible, focusing on the bow section, the most impressive part of the wreck, while the cavern, where Titanic’s famous grand staircase was once located, may also be explored.

While Titanic enthusiasts might relish the thought of getting up close and personal with the doomed ship – which traversed the Atlantic from Cobh Harbour only to fall foul of icebergs off the coast of Newfoundland, Canada, on its maiden voyage in 1912 – only those with deep pockets should apply.

Applicants must be over 18, while other criteria for getting a berth aboard includes: being able to board a Zodiac submersible in rough seas; “can demonstrate basic balance, mobility and flexibility”; can live aboard a research vehicle for seven nights; and be able to complete a required one-day helicopter underwater egress training.

The Titanic, which lies at a depth of 3,800m (12,500ft) approximately 600km off the Newfoundland coast, remains a subject of fascination. Recently, a menu of the first meal served aboard the ship – which included consommé mirrette, sweetbreads and spring lamb – sold for €113,000 at auction.

The ship has been immortalised in James Cameron’s Oscar winning movie, while visitor attraction Titanic Experience also attracts tourists in Cobh, Co Cork, the last stop before the doomed vessel steamed towards the United States.