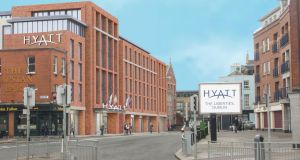 The 234-bedroom, four-star Hyatt Centric hotel will be situated by Fallon’s pub at entrance to the Coombe area.

US group Hyatt has agreed a deal to enter the booming Irish hotel market. It will open its first property here in the Liberties district of Dublin’s south inner city in May 2019, under its Hyatt Centric brand.

The €50 million hotel is currently under construction. It is being developed opposite St Patrick’s Cathedral by the Hodson Bay group, which operates two hotels in Athlone and and another in Galway.

The 234-bedroom, four-star hotel property will be situated at the entrance to the historic Coombe area of the Liberties, one of the oldest areas of the capital. The Coombe is beside Meath Street and Francis Street, adjacent to an up-and-coming residential area and near Dublin’s commercial heartland.

The Liberties area has become a magnet for hotel development in recent years. The Dublin-listed hotel group Dalata is developing a large Maldron across the street from the district. Others, including businessman Denis O’Brien, are building hotels deeper in the Liberties.

The Hyatt Centric Liberties will be operated by the Hodson Bay group, chaired by John O’Sullivan, under a franchise arrangement with the New York-listed company. It will employ 280 staff.

Hodson Bay faced a tough battle to get its first Dublin hotel hotel through planning, after objections from An Taisce. The project was strongly backed, however, by State tourism agency Fáilte Ireland, which implored planners to give it the green light due to the crippling shortage of hotel stock in the city.

The one-acre site was assembled over several years by Hodson Bay, which is controlled by members of the Roscommon-based O’Sullivan family.

“The site was particularly challenging. It was in disparate ownership and all of the jigsaw pieces had to be individually acquired,” said Mr O’Sullivan.

“All of the basement construction is now complete and the contractor is in the process of pouring the ground floor slab at the moment.”

He welcomed the deal with Hyatt, but emphasised that, for Hodson Bay hotels, “a majority of our employees are drawn from the local area”.

Jason Ballard, Hyatt’s regional vice-president for franchises, was in Dublin on Tuesday ahead of the formal launch of the new project. He said Hyatt, which has close to 800 properties globally, was attracted to Dublin’s “booming economy” and remained interested in opening more Irish properties.

Hyatt has been angling for an entry into the Dublin market for several years. It is believed to have previously considered deals including for the old Four Seasons property in Ballsbridge, which later became the Intercontinental.

Average room rates and occupancy levels in Dublin are back above pre-crash records, as a supply crunch and a booming economy and spike in tourism has squeezed capacity. Dublin is estimated to need at least another 5,000 rooms.