Ryanair will hope to get Max benefit from its new aircraft

Cantillon: Delay may pay off for the Irish airline as having cheaper to operate aircraft will be an advantage 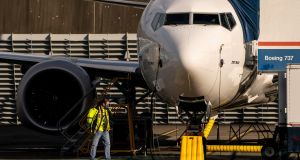 A worker beside a Boeing 737 Max aircraft parked at the company’s Renton production facility in Washington. Photograph: David Ryder/Getty Images

The havoc that Covid-19 has wrought on air travel has made us forget the Boeing 737 Max controversy. The Max is the latest version of Boeing’s “workhorse” short-haul aircraft, favoured by airlines including Ryanair, that will carry more passengers while burning less fuel, thereby boosting the profit margins of airlines.

However, air travel safety regulators in the US and Europe grounded the Max in March 2019 after two such craft crashed in Africa and Asia as a result of a suspected software problem.

It has taken far longer than expected for both the European Aviation Safety Agency and its US equivalent, the Federal Aviation Authority, to certify the Max as airworthy again, but that now looks likely to happen by the end of this year.

If that is the case Ryanair can expect the first of the Max aircraft that it has ordered to begin arriving next year, possibly by the summer. The Irish carrier has committed to buying 135 of the new model, with options for a further 75, that its chief executive Michael O’Leary has said it will more than likely take up.

Ryanair is the launch customer for a slightly larger version of the craft, called the Max 200, so final certification of this could take a few weeks longer. Nevertheless, it seems that the Max should be on its way to Ryanair relatively shortly.

This means that it will receive the first of those craft around two years after it was originally scheduled to happen. The delays in its delivery, to Ryanair and other airlines, were the biggest problem the aviation industry faced in 2019.

Now it looks like those delays could be an advantage of sorts. The Covid crisis may be at a far more manageable stage when the craft do arrive. Vaccines should have at least been launched by then, while there should less confusion over travel restrictions.

So air travel may be on the runway to recovery. Having new, cheaper to operate aircraft will be an advantage.

It goes to show that you if can hang on long enough through a crisis some good news eventually materialises.