Ryanair to shut down website and app for 12 hours 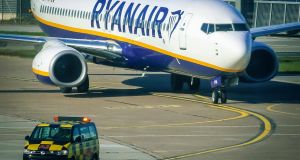 Ryanair spokesman Kenny Jacobs said 80 per cent of flights during the month arrived at their destinations on time.

Budget airline Ryanair has said its website and mobile app will be shut down for a 12 hour period this week as the company implements a “systems upgrade”.

The upgrade will take place between 5pm on Wednesday and 5am on Thursday. aThe airline’s online check-in service will not be available during this period.

Ryanair said it had contacted all customers booked to travel on Wednesday and Thursday November by email and SMS text to advise them to check-in online for their flight on Tuesday, before the website is shut down.

New bookings or changes to existing flights will not be possible during the period. Ryanair apologises for any inconvenience caused by this systems upgrade.

Ryanair spokesman Robin Kiely said the airline was sorry for the inconvenience to passengers.

Separately, passenger traffic at Ryanair was up 7 per cent to 12.6 million in October compared with the same month last year, despite the cancellation of hundreds of flights.

Ryanair said load factor, a measure of how full its planes are, stood at 96 per cent for the period.

Ryanair owns a 75 per cent stake in low-cost airline Laudamotion, which was founded by former Formula One champion Niki Lauda.

When passengers carried by Lauda were taken into account, total traffic rose 11 per cent to 13.1 million for October. Lauda traffic was 500,000 customers with a 89 per cent load factor.

Ryanair spokesman Kenny Jacobs said 80 per cent of flights during the month arrived at their destinations on time.

“During October, we were forced to cancel just over 300 flights because of a five day airport handler strike at Brussels Zaventem, some adverse weather [such as] winter storms, and continuing air traffic controller staff shortages in the UK, Germany and France,” he said.

“We operated over 71,400 scheduled flights with over 80 per cent of these flights arriving on time.”