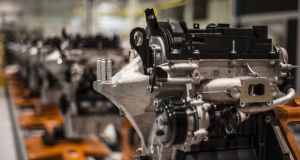 Ineos is proposing to use the portion of the Bridgend facility currently occupied by JLR to assemble its new vehicle, which the company wants to start producing by the end of the decade

Chemicals company Ineos is in talks with Ford about manufacturing vehicles at the automaker’s Bridgend engine plant as it seeks to diversify into the auto industry.

Jim Ratcliffe’s business is seeking to break into the automotive industry with an off-road vehicle, hoping to mimic the Land Rover Defender, and has shortlisted the south Wales location for its production centre.

Bridgend employs more than 1,700 people, but Ford has warned that it expects to lose 1,100 workers from the site after a contract to make petrol engines for Jaguar Land Rover comes to an end in 2020.

The long-term future of the facility is also in doubt as Ford also produces the same engines in several other global locations and the plant is exposed to any tariffs or trading frictions after Brexit.

A successful deal with Ineos would secure the future of the site, and bolster UK automotive manufacturing at a time when the industry is concerned over Brexit and some businesses, such as Dyson, plan to locate assembly work overseas.

Ineos is proposing to use the portion of the Bridgend facility currently occupied by JLR to assemble its new vehicle, which the company wants to start producing by the end of the decade, according to one of the people with knowledge of the discussions.

Sir Jim has said he wants to invest “hundreds of millions of pounds” in his vehicle project but has declined to say how many vehicles he intends to make.

Ineos said it planned to make a decision on its factory by the end of the year and had “several great options” on its shortlist, but declined to confirm or deny the Bridgend talks. He added that the previous shortlist, which included two UK sites and a number in Europe, had been whittled down, without giving specifics.

The company has already signed contracts with former Mercedes division MBTech for the engineering, and with Magna for its chassis development.

Ford declined to comment on Ineos, but said: “We continue to look at other high-technology opportunities for the future [OF THE SITE].”

Ford’s two British engine plants, in Bridgend and Dagenham, are both supported by contracts with JLR, which has taken engines from Ford since Jaguar Cars and Land-Rover were sold to Tata by the US carmaker in 2008.

JLR has its own engine plant at Wolverhampton, which will take both petrol and diesel manufacturing in-house after its Ford contracts end.

Unions have warned about the future of the sites, and called on Ford to find work for the facilities after the JLR contracts end.

The sites are also particularly exposed to the prospect of tariffs after Brexit because every single engine is shipped overseas.

Ford has already planned to reduce the workforce at Bridgend this year after moving from producing the 500,000 Sigma engines a year to making 125,000 Dragon engines a year.

Work on the Dragon engines began this week.

The JLR portion of Ford’s Bridgend factory has already seen its workload fall, with a planned five-day shutdown last week because of lower demand from Jaguar and Land Rover customers. – Copyright The Financial Times Limited 2018