Ryanair threatens to shut Cork and Shannon bases for winter 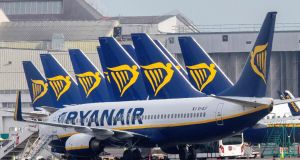 Ryanair has threatened to pull the plug on flights from Cork and Shannon airports this winter if the Government does not lift flight restrictions.

In a letter addressed to “all crew in Cork and Shannon”, Ryanair DAC chief executive Eddie Wilson said Government “mismanagement” had exacerbated damage to its operations.

He said “forward bookings this winter in Cork and Shannon, and to a lesser extent in Dublin, have suffered irreparable harm”.

Mr Wilson notes that the Government has promised a review of its Green List restrictions on September 14th, but adds: “You should be aware that if these quarantine restrictions from EU states are not lifted before the end of September, we will have no alternative but to close our Cork and Shannon bases on a temporary basis for this winter season.

“In those circumstances all pilots and cabin crew will be put on unpaid leave from the end of October.

“We will do our best to reopen these bases from March next year – if but only if – these failed travel restrictions to other EU states have been lifted in time for traffic to recover.”

The airline said some flights would continue to operate into Cork and Shannon from London Stansted, Liverpool and Manchester but at a much reduced level.

“We understand the EU Commission will introduce a new travel policy for EU member states from mid-Sept, and we are hopeful, but not confident, that the Irish Government will finally come into line with the EU’s safe air travel policy,” the airline chief said.

The trade union Forsa said the move by Ryanair was “very distressing news for crew based in Cork and Shannon, their families, other airport staff and the economy in both regions”.

“ It reflects the very difficult circumstances affecting the entire aviation industry as a result of the Covid pandemic. We’ve worked closely with all aviation employers, including Ryanair, in order to maximise job protection since March.

“We have called on the Government also to intervene to support the industry because Ireland’s connectivity through aviation is crucial to its economy. The industry supports quality jobs throughout the country.”

This is not the first time this year that Ryanair has threatened to shutter its bases at the airports. Back in June the airline warned it could close the bases at Cork and Shannon airports and let go up to 120 pilots in talks with unions on job cuts in the wake of the shut down.

In July, Ryanair said it was cutting 1,000 flights serving the Irish market, citing the Government’s 14-day quarantine rules. Half of those flights impacted Cork, Shannon, Knock and Kerry airports.