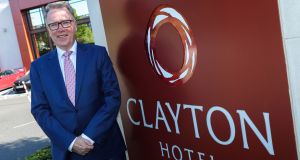 Dalata chief executive Pat McCann: “For 2020 it’s all about survival, and making sure we end up in a very good place with a strong balance sheet”

International visitors are unlikely to return to the Republic before March, the boss of the State’s largest hotel group said after the company said it was raising €94 million as new shares are issued.

Speaking to The Irish Times, Dalata chief executive Pat McCann said it would be at least the second quarter of next year before tourists from abroad returned to the Republic, something he said was crucial to the success of the Irish arm of the business.

He noted that some existing Government restrictions around doing business were “a bit confusing”.

“In our meeting rooms we can have a maximum of three people and that doesn’t make sense to us when they’re talking about having concerts,” he said, citing one example.

The boss of the hotel chain was speaking after the group posted a loss of €70.9 million in the first six months of 2020, mainly on the back of asset writedowns.

“From a trading perspective we were profitable; the big bulk is in the writedowns,” Mr McCann said.

Asked whether investors should anticipate further writedowns, he said: “I would hope that there wouldn’t be but, with valuations, you never know.”

The headline figures show a swift turnaround compared to the same period last year when it posted a €37.8 million profit.

The group, which owns, operates or leases 44 hotels in Ireland and Britain, said revenue for the first six months of the year was €80.8 million, compared with almost €202 million for the same period in 2019.

Dalata, which operates the Maldron and Clayton hotel brands, successfully placed 37 million new shares in the company on Tuesday, representing about 19.9 per cent of its issued share capital prior to the placing.

Application has been made to Euronext Dublin for admission of the shares to the Irish Stock Exchange and also to the Financial Conduct Authority in the UK so that the shares can be admitted for trading in London.

Mr McCann said the money was raised so the group could capitalise on opportunities that would likely arise as a result of the Covid-19 pandemic.

Dalata will develop a hotel site in Shoreditch, London, while the remainder of the funds will be held on its balance sheet to take out long-term leases.

“For 2020 it’s all about survival, and making sure we end up in a very good place with a strong balance sheet,” Mr McCann said, adding that forecasting in the existing environment was difficult in the absence of corporate business, tour operators and event-driven business.

In the first six months of the year cash and available facilities increased by €13 million to €175 million. The group had cash of €110 million and undrawn committed debt facilities of €111 million at the end of August.

Occupancy levels across the group’s chains of hotels reached 30 per cent in July, and is projected to be 40 per cent in August.

Last weekend, in London occupancy was of about 60 per cent, which Mr McCann said was encouraging.

It is in the process of developing 13 new hotels, with agreements signed for properties in Brighton and Manchester, bringing the total number of bedrooms controlled by the group to 12,500.