College series for Dublin in 2021 could attract 25,000 and ‘kickstart recovery in tourism’ 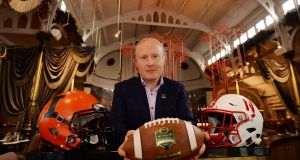 Paraic O’Kane, promoter of American college football and owner of Fire Restaurant: “We have to get the conversation started now . . . We have to plan for post-Covid.” Photograph: Alan Betson

The promoter of a series of US college football games due to take place in Dublin wants talks with the Government and industry groups to ensure that 25,000 tourists anticipated to arrive for next year’s €50 million game will get refunds on flights and accommodation if it is cancelled due to Covid-19.

The first of five of the annual series of Aer Lingus College Football Classics was due to take place in Dublin this weekend between Navy and Notre Dame, also known as the Fighting Irish.

One of the biggest tourist events on Dublin’s tourism calendar, it would have brought more than 40,000 US football fans to Dublin for the game at the Aviva stadium, but it had to be cancelled due to the virus.

Paraic O’Kane, the Fire restaurant proprietor who is also an investor in the series’ promoter, Irish American Events (IAE), said he hoped that next year’s Dublin game between Nebraska and Illinois, scheduled again for the same weekend in August, would still go ahead to “kickstart the tourism recovery”.

Mr O’Kane said the 2021 event would be expected to bring 25,000 high-spending visitors to Ireland from the US, with a total economic spin-off of €50 million. IAE is targeting a further 5,000 visitors drawn from the US diaspora in Europe, with the balance of the Aviva’s near-50,000 capacity coming from local sales.

He warned, however, that it would be impossible to sell tickets and packages to US visitors now unless they were guaranteed refunds in the event of a Covid-related cancellation.

He said he would raise it in talks with the Government, which provides financial support for the event, and also with hotel and airline groups.

“We have to get the conversation started now on terms and conditions for these visitors if we want them to book. We have to plan for post-Covid. We have begin planning now on the basis that [the game is going ahead],” said Mr O’Kane, whose business also comprises events at the Round Room beside the Mansion House, as well as Sole restaurant in the city centre.

“This would be the largest single event coming into Dublin over the next five years, and has the ability to kickstart the economy from a tourism perspective. But if we are going to convince the supporters of Illinois and Nebraska to sign up now for a game next August, we need to market it with a 100 per cent guarantee that they will be refunded any deposits they pay if it is cancelled.”

Mr O’Kane said that of the 25,000 tickets IAE expects to sell in the US for the 2021 game, about 5,000 would be through official packages with IAE’s partner travel agents, and they would be all guaranteed refunds.

About 20,000, however, would be independent travellers in groups of “six or eight” who would ordinarily be expected to pay deposits to local hotels for group bookings, and pay airfares upfront.

He said the promoters of the event are “not naive” and know that the 2021 game may be cancelled unless there is a coronavirus vaccine by early next year – the plug will be pulled at the beginning of next June if it can’t go ahead.

He said the refunds assurance could come in the form of an industry code of practice, or some form of Government support: “But the Government can’t be underwriting everything all the time.”

The Notre Dame-Navy game scheduled for this weekend was virtually a sellout before the plug was officially pulled on it in June. Mr O’Kane said the event’s partners, including Aer Lingus, Grant Thornton the State’s tourism agencies and Dublin City Council, have all agreed to stick with it next year.

About $5 million (€ 4.2 million) in “hello money” that was due to the college teams to get them to move their game to Dublin – the game was to be hived off from the normal US college football season – also does not have to be paid, while the Aviva stadium also won’t charge the organisers any of its stadium fees.

“The big bills are all ‘walk away’. We have a financial burden to take on from the cancelled but over the series, we’ll make it up,” said Mr O’Kane. He suggested that the payments to attract teams may have to be increased in future years, however, to attract them to Dublin. The “hello money” is part funded by the State, and Mr O’Kane said he intends to have further discussions with officials over it.

While the future of the series remains somewhat up in the air until the pandemic is resolved, Mr O’Kane said his Dublin restaurant and events business has adapted to the anti-virus restrictions that have laid waste to much of the local hospitality scene.

He was critical of the Government, however, for the “last minute” nature of some of its anti-virus announcements, such as the recommendation to avoid public transport. He says that was “devastating” for city centre businesses as it reduces the number of people who will venture out in town.

“It has fractured some of the messaging, in my opinion. Public transport was doing a good job on the virus risks, with the possible exception of the taxis, where a lot of drivers still don’t wear masks or have plastic screens. That’s where we should have focused efforts,” said Mr O’Kane.

“The Government and NPHET say they want collective action and that we are all in this together. But they can’t keep coming from NPHET meeting into a cabinet meeting, then straight into a press conference with new restrictions, without telling us what’s coming. There has to be some consultation. If they did, they would have industry buy-in. Instead, they have just created confusion.”