Clare council to spend €800,000 on Cliffs of Moher ticketing system

Planned expenditure comes against background of projected 80% decline in visitors 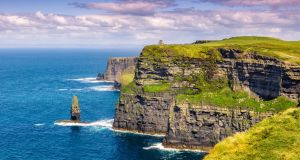 The council hopes the cliffs ticketing system will be in place for next March. File photograph: Getty

Clare County Council is to spend an estimated €800,000 on an integrated ticketing system for the country’s most popular natural attraction, the Cliffs of Moher.

The planned spend comes against the background of a projected 80 per cent collapse in visitor numbers to the cliffs this year due to the Covid-19 pandemic.

The council hopes that the ticketing system will be in place for next March.

The plans follow a €208,244 spend on new toilet facilities at the cliffs after existing facilities attracted visitor complaints last year. Records released under Freedom of Information show that on October 2nd last year, the Cliffs of Moher received “at least a dozen complaints throughout the day regarding the smell in the unisex toilets”. The new toilets opened on July 20th and a council spokesman said they have been “well received by visitors”.