Hoteliers warn 75% of tourism jobs may be lost 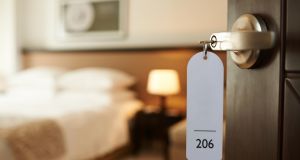 Hoteliers warn that almost three-quarters of Irish tourism-related jobs are at risk of being wiped out this year if the Government does not step in with supports such as easing restrictions on indoor gatherings, reducing VAT rates and ramping up Covid-19 testing and tracing.

The Irish Hotels Federation said that 100,000 of some 270,000 tourism jobs in the State at the start of the year had been wiped out by the pandemic, with a further 100,000 at “imminent risk in the coming weeks” amid a slump in autumn and winter bookings across hotels and guesthouses.

With the summer season finished, hotels and guesthouses are now reporting a 70 per cent drop in projected revenues for September compared with this time last year, the lobby group said, citing a survey of 307 establishments with combined room capacity of 29,800 bedrooms spread throughout the entire State carried out last week.

July and August saw average national room occupancy at 49 per cent, compared with 90 per cent for the same months last year, it said.

“Our industry is operating in a quasi-lockdown,” said federation president Elaina Fitzgerald Kane. “The existing supports are totally inadequate, given the current restrictions. If appropriate measures are not put in place, more jobs will be lost.”

The federation has called on the Government to “urgently” review the limit of indoor gatherings to no more than six people from three households to allow functions in hotels of up to 50 people, based on six people per table and protocols around physical distancing and wearing of personal protective equipment.

It is lobbying for the rates on the new employment wage subsidy scheme to be increased to levels of the previous temporary Covid-19 wage subsidy scheme. Under the new supports in place since the start of the month, the maximum weekly subsidy per worker fell to €203 from €410.

An increase “would make it possible for employers to retain staff during the difficult winter/spring months ahead and to facilitate training and upskilling structures designed to allow employees get personal benefit from this challenging period”, it said.

The federation is also looking for an extension of Covid-19 loan payment breaks to 12 months from the current maximum of six months, and a “permanent restoration” of VAT for tourism to 9 per cent – a rate that had applied for most of the past decade, before being restored to 13.5 per cent in Budget 2019.