Iveagh Garden hotel fails to get permission for extension 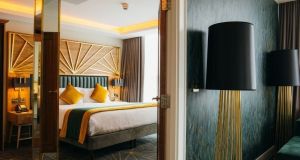 The Iveagh Garden Hotel opened in 2018 at an estimated cost of €40m. Its unique energy system harvests power from the river Swan which flows 50m below the hotel’s foundations.

One of Dublin’s newest hotels – the Iveagh Garden on Harcourt Street – has been refused planning permission for a 52-bedroom extension because of the scale of the plans and its impact on the street’s Georgian architecture.

The company which operates the four-star hotel, Olema Property Holdings, had sought leave to build a seven-storey extension to the rear of two buildings on Harcourt Street as well as a change of use for one of the existing buildings from office to hotel.

The development would have brought the Iveagh Garden’s capacity to 204 guest rooms.

However, council planners said the design, scale, height of the proposed extension as well as its proximity to other buildings did not relate sensitively to the special architectural character of protected structures on Harcourt Street.

They claimed the extension would cause serious injury to the setting of listed buildings and would represent an undesirable precedent, if approved.

The council said the plans would also contravene the Dublin City Development Plan 2016-2022.

It said the proposed extension would also be “seriously overbearing” on neighbouring residential properties.

“The proposed development would therefore be seriously injurious to the amenity of existing neighbouring residents, would depreciate the value of property in the vicinity and would set an undesirable precedent for development,” the council added.

The plans were also opposed by An Taisce which claimed allowing its proposed double penthouse would ultimately lead to “an incoherent and chaotic roofline development pattern on the once-graceful and coherent Georgian street.”

Olema has until September 9th to lodge an appeal with An Bord Pleanála against the council’s ruling.

The Iveagh Garden Hotel, which opened in 2018 at an estimated cost of €40 million, claims to be “Europe’s first sustainable hotel” due to its unique energy system. This harvests power from the river Swan which flows 50m below the hotel’s foundations.

The hotel is owned by Brian and Sally McGill, who also operate two other hotels on Harcourt Street: the Harcourt Hotel and Harrington Hall.