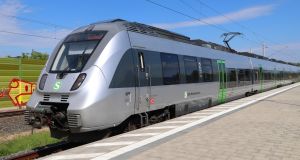 Bombardier is known to be bidding to supply trains to the Dart expansion. Other bidders include German engineering group Siemens Mobility and Switzerland’s Stadler Rail

Plans to expand Dublin’s Dart service and build a metro line linking the capital with its airport have lured manufacturer Bombardier to open an office in the Republic.

Bombardier, which is selling its train manufacturing business to French giant Alstom in a deal valued at €7 billion, has opened an office in Dublin that could employ up to 20 or 30 people, depending on its success in winning contracts here.

The multinational is also in talks to resolve difficulties that threaten to stall the sale of its Belfast aircraft wing manufacturing plant, where it employs more than 3,000 people, to Spirit Aerosystems.

According to Bombardier Transportation president Danny di Perna, about 10 staff currently work for the Dublin operation, opened to support bids for rail contracts as the Government steps up plans to develop public transport.

Mr Di Perna said that as a result of the shift in policy toward “green” transport infrastructure, Bombardier sees Dublin and the Republic as an important market.

“Once we win contracts, we are going to need system and product engineers on the ground to work with customers,” he explained.

While he acknowledged that it could not be taken for granted that any of the company’s bids would succeed, Mr di Perna argued that the opportunities were such that it was likely to “get something”.

Bombardier is known to be bidding to supply trains to the Dart expansion. This will involve extending the existing network and adding more than 600 new carriages, in a project with a likely price tag of €2 billion.

State company Iarnród Éireann is likely to announce the winning bid around the end of the year.

Mr di Perna said that Bombardier was also weighing a bid for the proposed Metro service.

This will tie Dublin city centre with the airport, providing a service for both air travellers and commuters.

However, various governments have toyed with the idea for decades without making any progress. “We think it’s real this time, there’s momentum behind it,” Mr di Perna said.

Bombardier believes its Aventra lightweight electric train would be an ideal fit for projects that the State is now considering.

Built at the group’s works in Derby in the UK, the train is used on networks including London’s Crossrail and overground.

Over the longer term, Mr di Perna suggested that Bombardier could join forces with the Government and third level colleges to develop an apprentice programme for engineers in the various disciplines required by the group.

The multinational is selling its Belfast plant, which manufactures wings for Airbus aircraft, and a Moroccan facility, to Wichita, Kansas-based Spirit for about $1 billion (€850 million).

According to recent reports, Spirit’s stock market filings warn that legal and regulatory barriers could prevent the deal going through.

Mr di Perna said that talks between the pair were continuing and said those difficulties could be overcome.

Regulators, including the EU’s competition commission, have passed the sale of Bombardier’s transportation division to Alstom, which supplies the trams used on Dublin’s Luas network.

The deal will create one of the world’s premier makers of trains, according to Mr di Perna. “Together with Alstom we are going to have a much bigger presence,” he said.

The pair signed a sales purchase agreement earlier this year. Competition authorities in Canada and China have yet to give their approval.

1 Hurrah for the companies giving staff more time off
2 RTÉ to seek 70 voluntary redundancies as ‘large costs’ beckon in 2021
3 Some Irish money market funds came close to danger in March
4 Covid-19 will worsen shortage of accountants, says CPA Ireland
5 ‘We lost money on our planned wedding in Spain. Covid saw to that’
6 Start-up Loanitt raises €570,000 as it looks to double headcount
7 Sustainable investment: How your pension can help tackle climate change
8 How to make the hybrid workforce model work
9 No-deal Brexit could trigger rise in food prices, says Simon Coveney
10 How long can Government afford to keep State pension age at 66?
Real news has value SUBSCRIBE