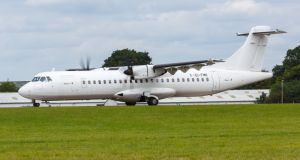 The Irish regional airline, which operates the Aer Lingus Regional service, was bought by the UK-based Stobart Group, earlier this year.

Stobart said on Thursday that the airline was “operating below the scenarios set out” when the group raised around €110 million from shareholders in June.

A trading statement blamed “continued quarantine arrangements in Ireland”, which limited the number of flights, for the the airline’s troubles.

The group put the airline up for sale early last month. Its trading statement said that it was actively talking to a number of parties interested in buying its stake. Stobart Air staff own a share in the airline.

Stobart Group is also in talks with Aer Lingus about renewing the regional air services contract, which is due to end in 2022.

The contract is out for tender. Aer Lingus parent, International Consolidated Airlines’ Group (IAG), said recently that several other airlines had expressed interest in providing the regional service.

In the months before he left, recent retired IAG chief executive, Willie Walsh, noted that the group was happy with Stobart Air’s service, but would discuss other offers also.

Stobart Group highlighted the Aer Lingus deal as key to the airline’s future viability when it bought the regional carrier.

Before Covid-19 struck air travel, part of its function was to feed transfer passengers to Aer Lingus’s transatlantic services at Dublin Airport.

“As with other divisions in the group, Stobart Air is carefully managing its cost base and is working with its various stakeholders to minimise cash burn while maintaining its ability to respond to changes in restrictions,” the UK company said.