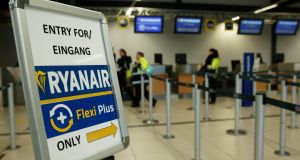 The threat of rolling strikes across Europe prompted Ryanair and its chief executive Michael O’Leary to about-turn on a long-standing policy and recognise trade unions.

Groups representing captains working for the airline in the Republic and Portugal were planning to strike on Wednesday, while German pilots’ union VC was threatening to halt work any time up to December 23rd.

Members of Spanish pilots’ union Sepla in Ryanair had signalled their willingness to strike earlier this week, while their Swedish colleagues were expected to follow suit in coming days.

Mr O’Leary decided to change the airline’s policy of not recognising unions after speaking to senior figures on its board. Insiders say it was a difficult decision for those involved.

“They came to the conclusion that ultimately if people want union recognition badly enough to go on strike then that’s what they want,” said one.

The airline has carefully developed a personnel strategy that sees it mix staff and contractors at each of its 60 or so bases. It paired this with negotiation of terms and conditions separately at each base. The structure was designed specifically to sidestep the possibility of collective bargaining – never mind union-led negotiation – by pilots (and other air crew).

Competing priorities of staff and contractors at each base also helped the airline to keep staff costs as competitive as possible.

Ryanair’s chief people officer, Eddie Wilson, confirmed that the threat of co-ordinated strikes across its operations in Europe brought about what was the airline’s most radical about-turn to date.

“That was going to disrupt passengers coming up to Christmas,” he pointed out. Mr Lyons added that Ryanair decided unionisation was coming at some point, so the airline agreed to recognise the pilots’ groups now.

He stressed that the dispute with the pilots was about recognition, not about Ryanair’s terms and conditions, which he maintained were among the most favourable in the industry.

Ryanair has more than 4,000 pilots, about half of whom are captains, a rank needed on every flight. According to Mr Wilson, about 75 per cent of them are directly employed while the balance are contractors. Most of its first officers are contractors.

Its chief people officer indicated that the company was prepared to look at issues such as contract arrangements versus direct employment in any talks with the unions.

He dismissed any speculation that the move to recognise unions would change Ryanair’s disciplined approach to controlling costs, which allows it to keep fares low. “We are not a legacy airline, our people are more productive,” he said. “The model doesn’t change.”