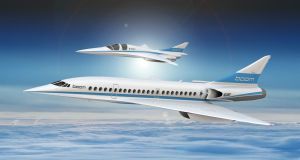 Supersonic travel is getting closer with a $10 million investment in Boom Supersonic by Japan Airlines (JAL). Boom Supersonic, based in Denver and founded by Blake Scholl, is planning the resurrection of supersonic travel. In exchange for their funding, JAL will be able to pre-order 20 of the new aircraft. It is 14 years since British Airways and Air France grounded the Concorde fleets.

JAL are not the only investors in 2016; founder of the Virgin Group, Richard Branson, agreed to buy the first 10 of these jets. He also promised that his spaceflight company, Virgin Galactic, would assist with flight test support.

Fáilte Ireland’s Dublin Convention Bureau has confirmed €64 million of new business has been won for Dublin so far in 2017. This revenue boost was a result of winning 150 new conferences for the city and county over the last number of months, which are set to deliver almost 45,000 international delegates to Dublin in events to take place over the period 2018-2021. Events booked include Velo City, European Cyclists’ Federation, Word Con, a science fiction convention, and a congress on obesity.

No “smart bags” for Christmas presents. From January 15th, Delta, America and Alaska Airlines are going to prohibit passengers from checking in smart bags, unless they have a removable lithium-ion battery. Smart bags, made popular by companies such as Bluesmart and Modobag, feature integrated technology that allows users to track their luggage, weigh it and lock it using a mobile app.

They also feature power banks for charging portable devices. Delta and American both said they have decided to ban the checking in of smart bags unless passengers can remove the lithium-ion batteries that power them over fears that damaged power sources could overheat and pose a fire hazard.

Delta is taking a leaf from the Aer Lingus Smart fares option and charging if people want to bring checked bags on transatlantic flights. The fee will be $60 per bag and a second bag will be $100.

Delta’s Skyteam partners in Europe, Air France/KLM and Alitalia will also charge for bags on transatlantic flights. This could bring to an end to cheap shopping in the United States. Last year US carriers earned $4.2 billion in ancillary revenues.

This month marks the two millionth passenger from Dublin

The world’s largest international airline began services from Dublin to Dubai in 2012. Within two years they had added another daily flight and now carry 22,000 people from Ireland every month. The one millionth passenger landmark was reached in December 2015. Emirates also carry up to 50 tonnes of cargo from Ireland every day and includes seafood, chocolates, beef, horses, botox and other pharmaceuticals.