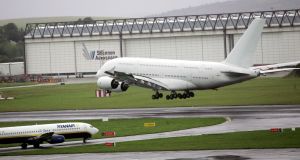 For low cost short haul flights the average cost in Ireland was just €5.66 per 100km, which was one of the cheapest.

Irish air travellers pay more for flights than their UK and French counterparts, according to a survey by online travel agency Kiwi. com.

However, the survey still ranks Ireland among the cheaper destinations in the world for air travel, particularly for low cost short haul journeys.

Kiwi.com’s annual Flight Price Index ranks countries on the basis of how much it costs to fly from there to several international hubs, while also taking into account the cost of internal flights.

Ireland was ranked 36th out of 80 with an average flight cost of €11.01 per 100km of travel, which factored in both short haul and long haul journeys.

This was significantly cheaper than Belgium, which was 13 times higher at €50.21 per 100km, but marginally worse than the UK and France.

For low cost short haul flights, the average cost in Ireland was just €5.66 per 100km, which was one of the cheapest.

Overall, the most affordable country was Malaysia, which had an average flight cost of €3.84 per 100km of travel, followed by Bugaria, India and Turkey.

To calculate the rankings, Kiwi.com reviewed over a million flights to find an average price of short-haul and long-haul flights on low cost and full service airlines from each of the countries.

The survey also took account of domestic flights by finding an average airfare from the country’s capital to up to five major cities within the country.

“Ticket prices fluctuate constantly and for many reasons. Some of the changes from one year to the next can be attributed to fuel prices, sociopolitical shifts like Brexit, and recent elections,” Kiwi.com chief executive Oliver Dlouhý said.

“Egypt and Turkey, for example, saw a decrease in ticket prices because of a decrease in demand as a result of regional turmoil,” he said.

“By tracking flight cost by country, travellers have more information with which to choose destinations that allow them to travel further on their budget.”