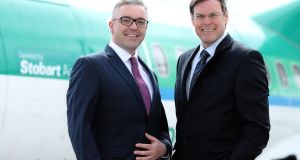 Stobart Air, which operates the Aer Lingus Regional brand as well as certain services for UK airline Flybe, says it is investing €25 million in an expansion of the business that will include the introduction of the first jet aircraft to its fleet.

Stobart Air says it will hire 60 new staff, many of whom will be cabin crew and pilots to staff the new jet aircraft, bringing its total number of employees to 570.

It plans to supplement its existing fleet of 17 turboprop aircraft with two new Embraer E195 jet aircraft. The expansion will boost capacity from its Southend base, near London, allowing it to fly longer routes.

It is not currently envisaged that the jet aircraft will be utilised on its Irish routes, which include short-haul flights from Dublin, Cork, Shannon, Kerry and Donegal.

Stobart Air, which morphed out of Aer Arann, flies 43 routes in total across its network.

The investment and extension into jet services is part of a new three-year growth strategy unveiled by the airline, after merger talks with CityJet broke down in December.

Stobart has also announced a shake-up of its senior management. Graeme Buchanan has been appointed as managing director, a promotion from his previous role as chief financial officer. He will report to Warwick Brady, deputy chief executive of the wider Stobart group.

Mr Buchanan said the addition of the jets will open up the possibility for Stobart to fly to more European destinations.

Separately, CityJet is to recruit 10 new trainee pilots for deployment across its European bases, including Dublin. The new pilots will be trained in Oxford and Phoenix in the US.

The Irish airline operates from eight European bases, with that number soon to extend to nine with the planned opening of a base in Tallinn, Estonia.