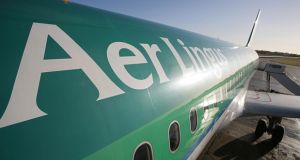 Aer Lingus may have to pay the State up to €4 million following the latest ruling, while Ryanair owes more than €12 million.

Ryanair and Aer Lingus are facing a €16 million tax bill after the European Court of Justice on Wednesday dismissed an appeal by the airlines and ordered them to repay State aid linked to Ireland’s now-defunct air travel tax.

The court ruled that lower rates granted for shorter flights between 2009 and 2011 were illegal subsidies.

The case is related to the Irish Government’s introduction of a travel tax in 2009, which levied a charge of €2 per passenger on flights of up to 300 kilometres and €10 a passenger on longer flights.

The European Commission had ordered in 2012 that the Government collect millions of euro for passengers carried by the two Irish airlines when Ireland moved to a flat €3 charge.

Following a complaint by Ryanair, the EU found that the lower rate between 2009 and 2011 constituted illegal state aid, as it favoured airlines whose business was mainly over shorter trips. The two airlines appealed this ruling in separate cases taken to the EU’s General Court, which upheld their claims. However, the Commission pleaded in a further appeal this year to the EU Court of Justice that its original finding should be retained and the carriers must pay up.

The ECJ on Wednesday agreed the lower tax rate constituted illegal subsidies. Aer Lingus now owes the State up to €4 million while Ryanair must repay more than €12 million.

“The General Court finds that the commission did not err in characterising the higher rate of €10 as the reference rate, and in concluding that the application of the different rates in the present case constituted State aid in favour of airlines whose flights were subject to the lower rate of €2 during the period concerned,” it said.

However, the General Court finds that the commission erred in quantifying the amount of aid to be recovered at €8 per passenger. Inasmuch as the economic advantage resulting from the application of that reduced rate could have been, even only partially, passed on to the passengers, the commission was not entitled to consider that the advantage enjoyed by the airlines amounted automatically, in all cases, to €8 per passenger,” the ECJ added.

Ryanair said it had been expecting the judgment. It said it would have to repay €12 million despite having not charged passengers the full amount of tax.

“This ruling now clears the way for Ryanair (and other airlines) to pursue our High Court action against the Irish Government to recover the € 88million of damages we suffered as a result of being forced to pay this illegal tax,” a spokesman for the company said.