Commission for Aviation Regulation ruled to cut charges to €7.87 from €9.65 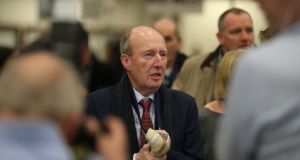 In what could yet be one of his last acts as Minster for Transport, Tourism and Sport, Shane Ross has appointed the panel that will hear State company DAA’s challenge to a ruling that it should cut passenger charges at Dublin Airport to an average of €7.87 a head over the five years to 2024.

The Commission for Aviation Regulation (CAR) decided this in October, annoying the DAA, which says reducing charges will threaten its ability to fund a €2 billion expansion required to ease bottlenecks and pave the way for the 40 million passengers it expects to handle by the decade’s end

DAA wanted the charges left at €9.65 a head, the maximum it was allowed to levy in 2018. At this level, the State company says that it can finance the expansion while keeping charges both stable and lower than those imposed by competing airports around Europe.

Unlike some previous incumbents in transport, Ross did not step into the row last year when the CAR ruled. So, it is fair to speculate that the outgoing minister favoured lower charges.

Nevertheless, he has appointed the panel to hear DAA’s appeal against the commission’s finding. Senior counsel, Eoin McCullough, will chair it, while the members are aviation consultant Andrew Charlton and Hannah Nixon, who has “extensive experience” with economic regulation.

They have three months to complete their work, after which they can uphold the commission’s finding or refer it back for review.

Given the time involved, we should – hopefully – have a new minister by the time the appeal is finished. It will be interesting to see what view they have of airport charges and regulation.