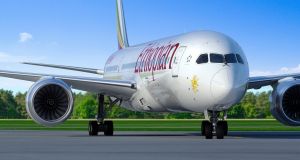 The number of passengers carried through Dublin by Ethiopian Airlines has grown by 37 per cent over the past three years.

The first airline to use the Boeing 787 Dreamliner from Ireland, Ethiopian Airlines, is celebrating carrying its millionth passenger through Ireland next Monday. The airline, which connects three continents, has been operating from Ireland for less than three years. It connects Addis Ababa to Dublin to Los Angeles.

Passenger numbers have grown by 37 per cent, the airline’s load factor has increased by 26 per cent and business-class traffic is up a whopping 79 per cent. Last year, Ethiopian was upgraded to a four-star airline by Skytrax, the consultancy which runs the airline and airport review and ranking site. It is the biggest carrier in Africa, with 56 cities connected.

The most punctual air carriers among the largest airlines in the world are two Japanese airlines, Japan Airlines and ANA. Delta topped the punctuality table in the United States, according to the OAG annual punctuality report. Japan Airlines had an on-time performance 85.3 per cent and ANA was on time 83.8 per cent. Delta ranked third with 82.8 per cent on-time. Among airports with at least 30 million departing seats per year, passengers were most likely to be on time departing from Tokyo Haneda, Madrid and Atlanta, according to OAG.

Airports muscle in on gyms

The latest trend to hit airports across the US and Canada is the opening of airport gyms. So instead of spending layover time in the bar watching sports, why not check out the airport gym. There are 190 gyms in North American airports and the tally is growing. So pack your trainers and gym gear in hand baggage and make good use of the time. You can find gyms on airportgyms.com.

How do you get a 27ft Starchaser rocket into a hotel room? That is just one of the things that have been left behind in Travelodge hotels around the UK last year. The 542-chain of hotels also found a rabbit, dog, two fish and a cat, £500,000 in share certificates, a bath full of potatoes, a pilot’s licence, 20 Bob the Builder costumes, a gold Indian wedding necklace and a 50-year old teddy bear. You can see the full listhere.